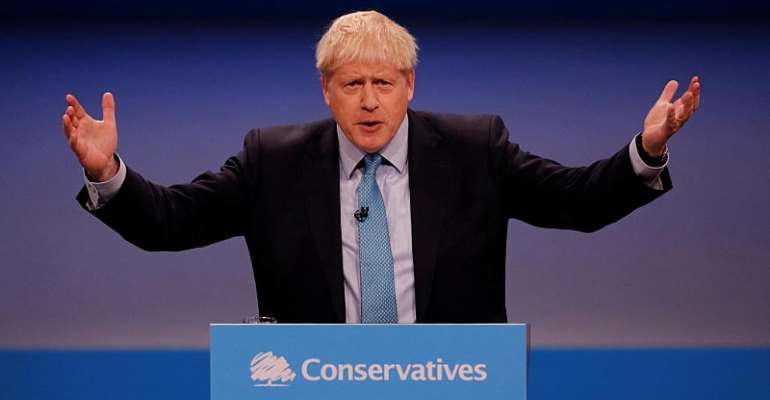 UK Prime Minister Boris Johnson is to send what he called a "constructive and reasonable" proposal for Britain to exit the EU on Wednesday. In a speech to his Conservative party, he said he wanted to find an alternative to the Irish "backstop", but maintained there would be no checks at the border.

Johnson warned that Britons would lose trust in democracy if Brexit does not happen by the 31 October deadline.

Voters narrowly chose to leave the EU in a 2016 referendum, but the country remains deeply divided over the departure terms.

"After three and a half years, people are beginning to feel that they are being taken for fools," Johnson told Conservative party members in Manchester.

"They are beginning to suspect that there are forces in this country that simply don't want Brexit delivered at all. And if they turn out to be right in that suspicion, then I believe there will be grave consequences for trust in our democracy."

No hard border with Ireland "We will under no circumstances have checks at or near the border in Northern Ireland," said Johonson.

The agreement negotiated between the EU and former Prime Minister Theresa May was rejected three times by Parliament, largely because of opposition to the "backstop", a mechanism set up to ensure no customs checks or border infrastructure between Ireland and Northern Ireland.

Johnson and other Brexit supporters oppose the backstop because it would keep the UK bound to EU trade rules in order to avoid customs checks, limiting the country's ability to strike new trade deals around the world.

The Daily Telegraph reported that Johnson's new plan proposes to keep Northern Ireland in a regulatory zone with the EU for food, agricultural and industrial products until 2025. The EU has previously rejected any proposals that contain a time limit.

Johnson warned that Britain was prepared to leave the EU without a deal, a so-called no-deal Brexit, if the EU does not renegotiate the previous agreement.

"This is a compromise by the UK," he said, adding that he hoped EU leaders "understand that and compromise in their turn".

European scepticism The European Union said in a statement that it will give any proposal serious legal vetting before deciding whether or not to consider it a basis for future talks.

European Commission President Jean-Claude Juncker is set to speak with Johnson Wednesday afternoon, and technical talks among both sides are also set up.

"The deal that is in place today is a good deal. France is waiting for substantial modifications," she told reporters, adding that France also wanted "tangible" proposals from Britain.

Many EU diplomats fear the United Kingdom is heading towards a no-deal departure from the European Union or another delay as they say the British proposals are not enough to get an agreement by 31 October.