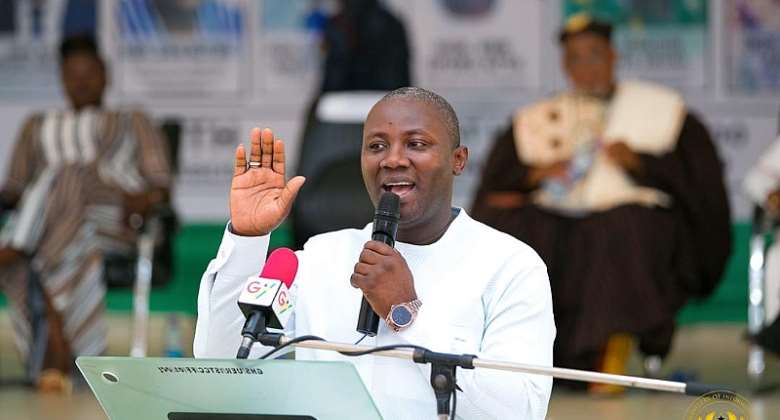 Chief Executive Officer of the Nation Builders Corps (NABCO) Dr. Ibrahim Anyars Imoro, has touted the benefits of the NABCO with much emphasis on how it has empowered jobless graduates and the teeming jobless Ghanaian youth at large.

Dr. Anyars further indicated that NABCO, since its launch has represented an evidence scale of the investment going into the youth of the country.

He disclosed that in the Upper East Region alone, the over 3,000 NABCO trainees earning GHS700 monthly for a year brings to the region over GHS26 million cedis.

Projected onto a national scale, the 100,000 NABCO Scheme has a monthly budget of over 70 million cedis. Over 13 million US Dollars monthly at the current exchange rate. This implies an investment of over 156 million dollars annually.

"The President, Nana Akufo-Addo is a believer in the youth as the future and thus considers their empowerment an essential part of his vision for a Ghana Beyond Aid. By the huge investment, these graduates will be the first to access opportunities of the envisioned transformed nation. This is simply an investor in people President," Dr. Anyars posited.

He went on to add that NABCO's design as a work and learn scheme ensures that skills and work readiness are central to the implementation of the scheme. Hence, graduates feel empowered compared to the state of despondency they faced during the pre-NABCO period.

"The initial doubts over sustainability considering its sheer scale have not been borne out. The arguments relative to sustainability bothering on two issues: the funding for the scheme as well as the exit arrangements. On funding, the government has kept its side of the bargain with payments," he underscored.

Touching on the challenges facing the policy, he said a few issues that surrounded payments in recent times were as a result of some technical challenges and not a financial issue as some people have asserted.

"Secondly, the three-pronged exit strategy appears to be working: retention, self-employment and entrepreneurship and finally further education. From the commencement of the programme on October 17 last year, over 11,000 trainees have already transitioned into one of those projected tracks," Dr. Anyars underscored.