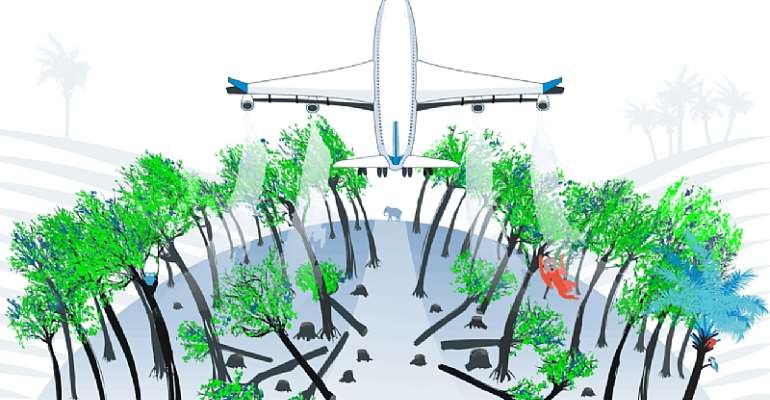 The aviation industry’s climate targets are likely to lead to a dramatic increase in demand for palm oil and soy for aviation biofuels. A new report concludes that this may result in 3.2 million hectares of tropical forest loss – an area larger than Belgium.

As the general assembly meeting of the International Civil Aviation Organization (ICAO) got underway in Montreal, Rainforest Foundation Norway’s new report ‘Destination deforestation’ goes into the heated debate about “flight shame” and the role of the aviation sector in contributing to the climate crisis.

The report reviews the status of the targets the aviation industry has set for alternative fuels and shows how high the risk is that expanding biofuel use in aviation will cause the last thing the world wants or needs right now: increased deforestation.

The aviation industry has set an aspirational goal to reduce its CO2 emissions by 50 percent in 2050 (compared to 2005), without limiting growth. Central to this vision is a near complete shift from conventional jet fuel to alternative aviation fuels. Near total replacement of fossil fuel would be needed to meet this target.

The cheapest and most readily available feedstocks for HEFA jet fuel are palm oil and soy oil, which are closely linked to tropical deforestation. Unless alternative aviation fuel policies actively support more sustainable options, it is likely that meeting the aviation industry’s aspirations to reduce emissions would lead to a sharp increase in demand for soy and palm oils.

Previous studies, including some published by the EU Commission, have shown that the climate impact of biofuels based on palm oil and soy oil is even higher than continuing to use fossil fuels.

An area the size of Belgium at risk
The report concludes that this increased demand for palm oil and soy could drive 3.2 million hectares of tropical forest loss (an area larger than the size of Belgium) and 5 gigatons of land use change CO2 emissions (close to the current annual greenhouse gas emissions of the USA) in 2030, unless measures are taken to avoid the targets being met using the most readily available aviation biofuel technology and feedstocks.

“The aviation industry risks becoming a major threat against the world’s rainforests. While ICAO’s proposed use of alternative aviation fuels is meant to reduce emissions, it in fact risks inducing massive emissions from the destruction of tropical forests and peatlands, alongside loss of biodiversity and violations of the rights of forest-dependent peoples”, says Nils Hermann Ranum of Rainforest Foundation Norway.

Aviation biofuel policy at the EU level and in selected countries is also reviewed, revealing that proposed government programs in countries such as France, Finland, Sweden and Indonesia could contribute to the massive deforestation outlined in the report, through varyingly allowing for the use of aviation biofuels based on palm oil, PFAD and soy oil respectively.

Strong measures are needed
Avoiding the direct use of palm oil and soy oil as feedstocks can reduce the deforestation impact of alternative fuel policies, but due to the connectivity of global vegetable oil markets, any use of food oils as biofuel feedstock will drive expansion of tropical oil crops, with associated indirect deforestation and accompanying greenhouse gas emissions.

“The aviation industry should take urgent steps to avoid using biofuels from the highest deforestation risk feedstocks such as palm oil, PFAD and soy. They should also exclude or limit support for biofuels from food oils more generally. Anything less would risk severely undermining the world’s commitment through the Sustainable Development Goals to stop deforestation and strive to limit global temperature rise to 1.5 degrees Celsius”, concludes Ranum.