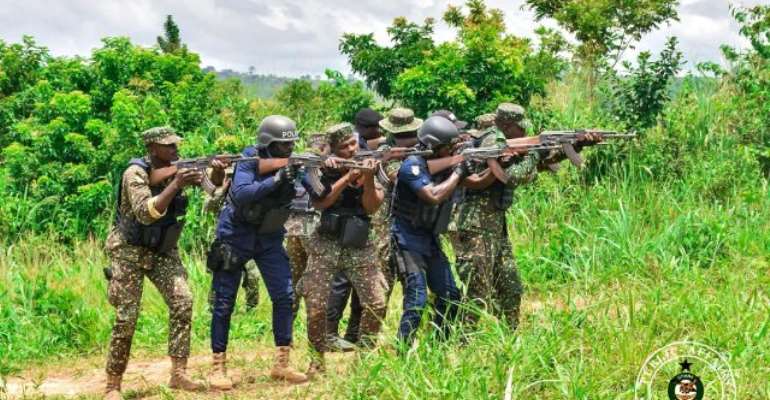 The participants were taken through unarmed combat, advance weapon firing techniques among many others.

About 191 personnel of the Ghana Immigration Service (GIS) and Ghana Police Service (GPS) have completed a three-week intensive counter-terrorism training in Huhunya in the Eastern Region.

The purpose of the first-ever joint training in counter-terrorism, codenamed High-Risk Operation Survival, was to enhance the combat fitness, weapon handling, shooting skills, willpower, and speed among others of participants.

The participants were taken through Taekwondo (unarmed combat), advance weapon and firing techniques, tactical progression, vehicle search, and crowd control. The rest were mountaineering, navigation exercise and rapid-response and rescue operations on land and in water.

The Head of Border Management, Commissioner of Immigration (COI) Isaac Owusu Mensah who addressed the personnel at a closing ceremony on behalf of the Comptroller-General of Immigration (CGI), commended them for their determination, discipline and display of professionalism throughout the training programme.

He said a once peaceful West African sub-region was gradually being consumed by terrorism and terrorist-related activities, for which reason Ghana had to hold itself in readiness to prevent any possible attacks.

“The training of officers and men of the two Security Services is, indeed, timely,” he added.

COI Mensah said the decision by the Management of the GIS to decentralize its newly formed Rapid Response Unit across the Regional Commands was to enable the unit to respond quickly to any possible terror attack at the country’s frontiers.

He expressed gratitude to the authorities of the Police Service for the training given to Officers of the GIS.

The Director-General in-charge of Operations of the GPS, Commission of Police (COP) Alex Mensah who spoke on behalf of the IGP, urged the personnel to be alert, creative and analytical in tackling the menace of modern-day crime because the modus operandi of perpetrators kept changing.

“You are going out to serve a highly critical public that expects more innovative ways of handling security,” he said.

He also admonished them to be disciplined at all times, read and imbibe the principles outlined in the Service Instructions manual to enhance their output.