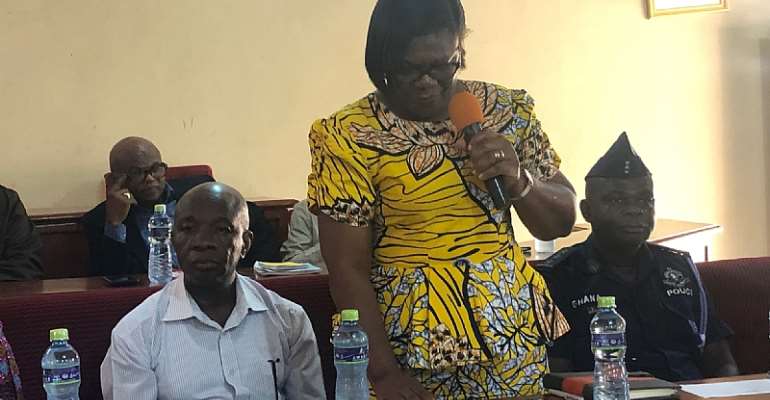 The Head of Local Government Service, Ing. Dr. Ato Arthur and some Senior Bureaucrats at his office paid a working visit to the Atwima Mponua District Assembly on a familiarization tour.

The District Chief Executive, Honorable William Darko, in his welcome address commended the Head of Service for such a novel visit by the Head of Service. He stated that, the staff at his office are doing a yeoman’s job for the betterment of the District. He, therefore, made a passionate appeal for more staff to be posted to the district to augment the existing ones.

He noted that, this visit was part of his agenda when it became necessary to orient staff the Physical Planning Unit and Parks and Garden Department in Kumasi. He posited that, Nyinahin, Nkawie and Mankraso are the Districts he planned to visit.

The Local Government Capo, mentioned that, sanitation issues has come to the fore and its a worrying situation to the President of the Republic. Dr. Ing. Arthur, pleaded with the Chief Executive and the Coordinating Director to equip the Environmental Unit with the needed logistics to make their work effective and efficient.

Also, he touched on revenue, which he believe is the life-blood on which the Assembly can make physical developments to their credit. He bemoaned the practice where revenue collectors under invoice monies collected from the citizenry to enrich their pockets. He advised the Assembly to adopt technology to track their revenue sources (Building Permit, Property Rates etc) for the benefit of the District.

On professionalism, Dr. Arthur asked the staff to desist from espionage; by taking shots of official documents and circulating same on social media. Furthermore, the taking of photographs and selfies as well as receiving amorous and friendly calls at the office and during working hours should be a thing of the past.

Without mincing words, the Head of Service asked the DCE and DCD to crack the whip on late comers and truants. He posited that, the Biometric-attendance report should be acted upon when it is noticed that, some staff are in actus-rues on the ethics of the service. Also he touched on mutual respect betwixt staff which is the key index for a successful Assembly.

In addition, Nana Arthur asked all people to be neutral in their dealings as far as politics are concerned. He quoted the CLOGSAG vs Attorney General case where the Supreme Court barred Civil and Local Government Staff not to partake in any political endeavors. He also touched on postings. “Don’t get it twisted when you are posted out of your comfort zone or impugn political interference when you are posted out”, he stated.

Bringing his extempore speech to an end, Dr. Ing. Ato Arthur, admonished all to preach about the upcoming referendum which seeks to amend some portion of the 1992 constitution and pave way for the election of District Chief Executives and Assembly Members on party lines at any place they find themselves.

The meeting brought all service commanders in the District to the Assembly and all staff were duly present to honour the head of Service.