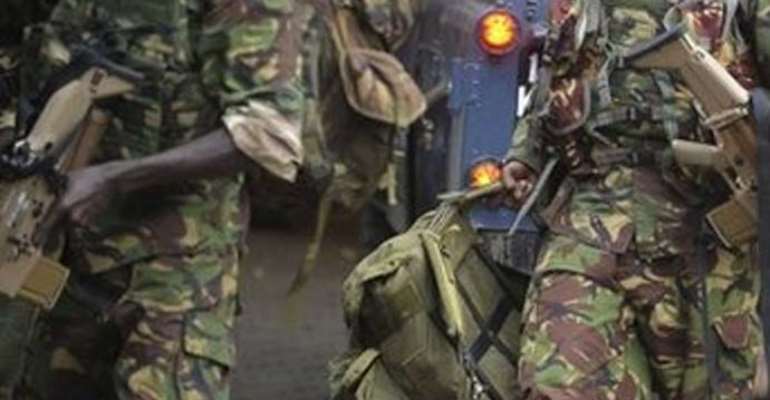 Lance Corporal Annan Agoe, a military officer with service number 194663, has been arrested by the Nungua Divisional Police Command for allegedly assaulting a policewoman who was on duty directing traffic at Nungua in Accra.

The victim (named withheld) attached to the Kpeshie Motor Traffic and Transport Department (MTTD) was directing traffic in front of the Nungua Senior High School when she was assaulted.

The victim was slapped two times by Lance Corporal Agoe who was said to be heavily drunk. It had to take the intervention of commuters to save the policewoman from further assault.

A source told DAILY GUIDE that the action of the soldier drew the attention of many drivers and traders in the area who intervened. They then arrested the soldier and handed him over to other police officers who rushed to the scene later.

Narrating the incident to DAILY GUIDE, Adjetey Sowah, a trader in the area, said the incident occurred around 4pm on Monday.

He said the soldier walked from the Nungua Traditional Council Area and stood close to the place where the policewoman was directing traffic to pick a vehicle to Michel Camp.

“The drunk soldier tried to stop a vehicle at an unauthorised place but the policewoman asked him to move forward to the bus stop,” he recounted.

He said the directive by the policewoman infuriated the soldier who in the process held the woman by her dress and slapped her twice.

Adjetey continued that the policewoman also returned a slap and that attracted passers-by who separated the two security personnel.

The soldier, according to Adjetey, was arrested and handed over to other police officers who came to the rescue of their colleague and sent him to the Nungua Police Station.

When contacted, Colonel Eric Aggrey Quarshie said the issue had not yet come to the notice of the Military High Command.

ASEPA petitions Presidency for names of members on committee...
34 minutes ago