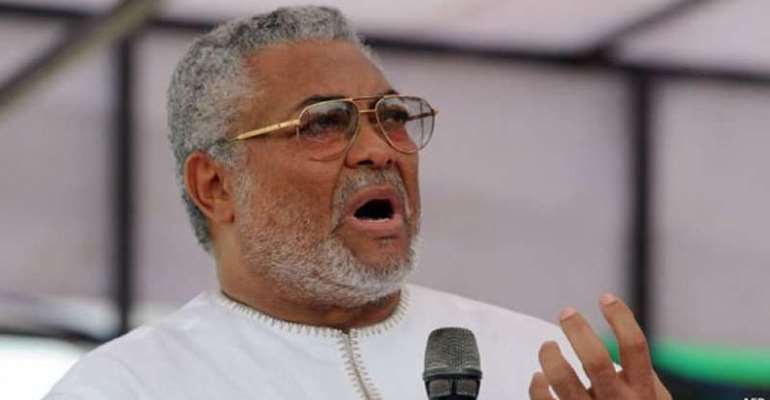 Ex-President Flt. Lt. Jerry John Rawlings has reiterated his concern over what he sees as 'lack of respect' coupled with 'incessant insults' within the rank and file of the opposition National Democratic Congress (NDC).

According to him, respect for authority and leadership, which was among the core tenets of the party that he personally formed, has suddenly been relegated to the background nowadays.

“There are some NDC members who can really insult. These people, with mouths like acid, can insult you proper,” Mr. Rawlings claimed.

Addressing the National Cadres Conference at Ejisu in the Ashanti Region last Saturday, the NDC founder observed that unlike the NDC, the New Patriotic Party (NPP) does not insult too much.

“The ruling NPP also insults as it is with every human institution, but the NPP doesn't waste too much time on insults as the NDC does,” Mr. Rawlings observed, attracting wild applause from audience.

Continuing, he said insults and lack of respect for leadership would not help the NDC in any way, especially as the party was working to recapture political power.

The NDC founder also lambasted some of his party leaders for being 'too wicked' and 'selfish', adding that such negative attitudes were serving as a stumbling block to the effective growth of the party.

“NDC, NDC, some of your leaders are very wicked. The NDC has some leaders who are 'self-centred,” he said bluntly.

Justifying his strong conviction that some NDC leaders were very wicked and selfish, he said it didn't make sense for the NDC to discriminate against a powerful group like the Cadres.

According to him, the Cadres, from all indications and happenings in the party, had been sidelined and disrespected by the current NDC leadership “and that is very appalling”.

Mr. Rawlings recounted the tireless efforts the Cadres made to make the NDC stronger, especially during the formative years of the party, pointing out that nobody or group has the right to sideline the Cadres.

The NDC founder also expressed extreme anger over what he described as “moneycracy”, which is now the order of the day in the NDC, saying NDC ought to return to the tenets of the party.

The National Cadres Conference was graced by some top NDC members; notable amongst them were Prof. Joshua Alabi, Johnson Asiedu Nketia and others from all the 16 regions of the country.

They used the occasion to fraternise, discuss the current happenings in the country, especially in the NDC, and what the Cadres could do collectively to help advance the cause of the NDC.

We will not hesitate to proceed on strike on Monday if deman...
46 minutes ago