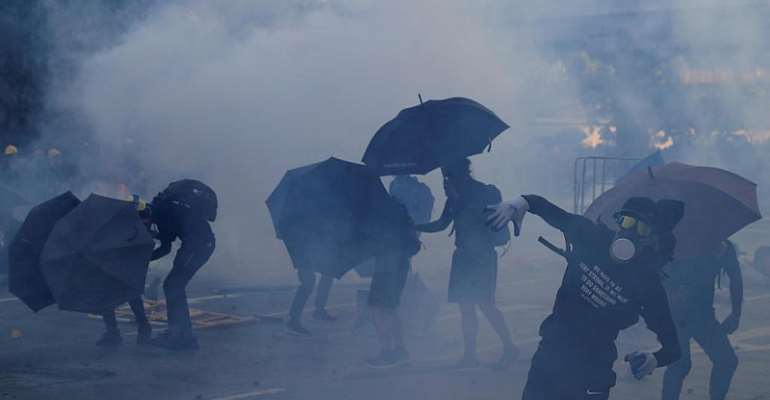 Hundreds of people staged a sit-in Wednesday in Hong Kong outside the school of a student who was shot by police on China's National Day. Tuesday's demonstrations were the most violent in nearly four months of anti-government unrest. More than 180 people were arrested.

The protests, on the 70th anniversary of the founding of the People's Republic of China, degenerated into chaos as police fired tear gas, water cannons and rubber bullets at protesters all over the city who were themselves throwing petrol bombs and rocks.

More than 100 demonstrators were injured, including 18-year-old Tsang Chi-kin, who was shot in the chest with a live round. He is in stable condition in hospital.

Shooting increases tension
Protesters have previously been hit with bean bags rounds and rubber bullets and officers have fired live rounds in the air, but this was the first time a demonstrator had been shot with a live round.

The shooting was captured on video that quickly went viral. Tsang was filmed trying to strike the officer with a pole as he was shot.

Police said the officer was under serious threat and acted in accordance with official guidelines.

Police said 25 officers were injured in clashes, including some who suffered chemical burns from a corrosive liquid that was thrown at them by protesters. The liquid also wounded some journalists.

Outside Tsang's school on Wednesday students chanted slogans and held pictures of the incident.

A hardening protest movement
The protest movement started over an extradition bill – which has since been rescinded - that would have allowed people to be sent to mainland China for trial. The demonstrations have evolved into calls for greater democracy, and poses the gravest popular challenge to President Xi Jinping since he came to power.

The protest movement's main demands are an independent inquiry into police actions, an amnesty for those arrested and universal suffrage.

But Beijing and Hong Kong leader Carrie Lam have said they are unwilling to meet those demands.

A prima facie determination as a pre-condition for removing ...
7 minutes ago