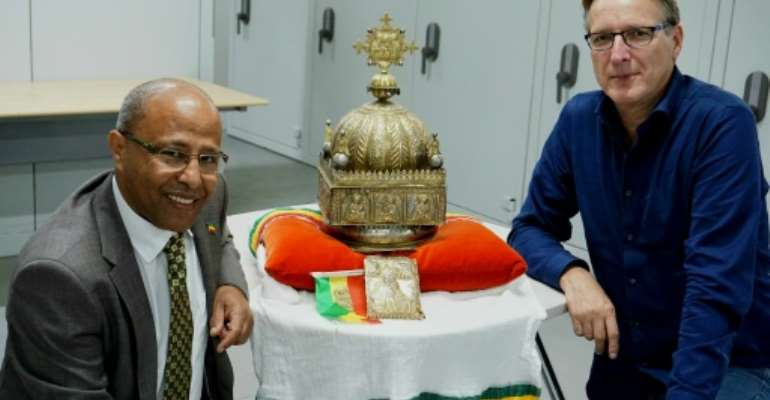 A priceless 18th-century Ethiopian crown is set to be returned from the Netherlands to Addis Ababa after a one-time refugee found it in a suitcase and hid it in his apartment for two decades.

Brand, dubbed the "Indiana Jones of the art world" for his discoveries of missing works, said the crown, which is currently being held in a secure location, would soon be handed to the Ethiopian authorities.

Speaking at his apartment in the Dutch port city of Rotterdam, Sirak told AFP the remarkable story of how he came into possession of the crown -- which experts say belongs to a series of some of Ethiopia's most important cultural artefacts.

Sirak, a former Ethiopian refugee who today works as a management consultant for the Dutch government, fled the country during the late 1970s during the so-called "Red Terror" purges.

Once settled in the Netherlands, Sirak used to receive a stream of Ethiopians including pilots and diplomats, along with people who had fled a continuous cycle of hardship in Africa's most ancient country.

The crown, which is currently being held in a secure location in the Netherlands, would soon be handed to the Ethiopian authorities. By Jan HENNOP (AFP)

Then, in April 1998, while looking for a document, Sirak stumbled upon the crown in a suitcase left behind by one of his visitors.

"I looked into the suitcase and saw something really amazing and I thought 'this is not right. This has been stolen. This should not be here. This belongs to Ethiopia'," he said.

'It would just disappear'

Sirak said he confronted the suitcase's owner -- whom he did not identify -- and told him that the crown "will not leave my house unless it goes back to Ethiopia".

Shortly afterwards Sirak posted a message on an Ethiopian chat group on the internet -- still a new phenomena back in 1998 -- asking what people thought he should do with "an Ethiopian artefact".

But he did not get a satisfactory answer "and I did not want to return it to the same regime that had made it possible for the crown to get stolen," he said.

The former refugee decided to become the crown's de facto guardian "until such time it could go back".

For 21 years the crown was hidden in his apartment as Ethiopia continued to be ruled by an iron-fisted one-party government.

During that time, Sirak was pressured by Ethiopians who knew he had the crown and wanted to force him to give it back.

"But I knew if I gave it back, it would just disappear again," he said.

Sirak said however that when Prime Minister Abiy Ahmed took office last year, he felt that things had changed sufficiently in Ethiopia to finally give the crown back.

Brand said Sirak had contacted him and "told me he was in possession of an Ethiopian artefact of great cultural importance.

"It turns out that Sirak Asfaw had been the custodian of a rare 18th-century Ethiopian crown for the past 21 years and wants to give it back," said Brand.

"It was a story straight from a crime thriller," said the art sleuth, who became world famous in 2015 after finding two bronze statues of horses made by Hitler's favourite sculptor Joseph Thorak.

The Dutch government too confirmed to AFP that Brand had told them about the crown's existence saying "its authenticity will now have to be established in close cooperation with Ethiopian authorities," before the next steps will be taken.

'This is Ethiopia's identity'

The artefact is currently being stored at a high-security facility in the Netherlands, where it was seen by an AFP correspondent.

Jacopo Gnisci, a research associate at Oxford University who also examined the artefact and confirmed its authenticity, said there were less than two dozen of these crowns, called "zewd", in existence.

"These crowns are of great cultural and symbolic significance in Ethiopia, as they are usually donated by high-ranking officials to churches in a practice that reaches as far back as the Late Antiquity," he told AFP.

This crown has an inscription dating to 1633-34, but Gnisci said it was more likely to have been made a century later and was commissioned by one of Ethiopia's most powerful warlords, "ras" Welde Sellase.

Gnisci, who is currently writing a book about medieval Ethiopian manuscripts, said Welde Sellase likely donated the crown to a church in a village called Cheleqot near the modern-day city of Mekelle in northern Ethiopia.

The last time the crown was seen in public, it was worn by a priest in a photograph taken in 1993 before it disappeared, said Gnisci. An investigation was launched at the time but the culprits were never found.

"These crowns are of priceless symbolic value and it is important that they be retuned to Ethiopia," said Gnisci.