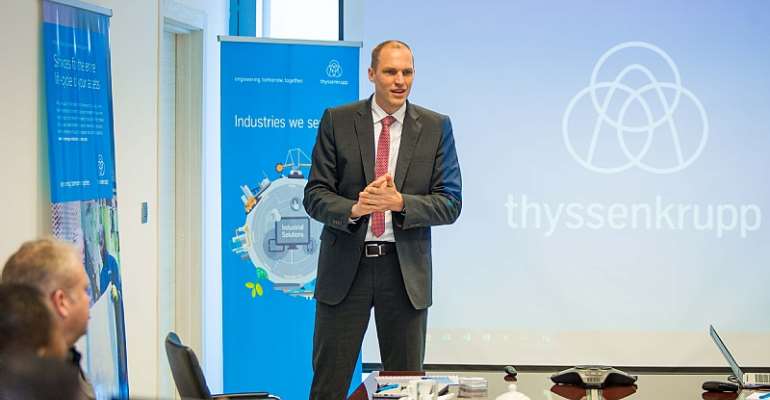 Thyssenkrupp, a renowned international company has declared its intention to help revamp Ghana’s industrial sector by investing in key areas to ensure the country becomes its hub for the entire West Africa Region.

The German multinational company has been in existence in the country since 1905 and has been responsible for the provision of industrial materials to set up various facilities.

Notable amongst them include the supply of diesel-hydraulic locomotives to the first railway line built in the country, the building of the glass factory at Abosso, supply and assembly of crude oil tanks at the Tema Oil Refinery, as well as the equipping of elevators and state-of-the-art passenger bridges at the Kotoka International airport.

The Multinational Company is now looking to blow up in Ghana and West Africa as a whole and has thus affirmed its readiness to contribute to the growth of industrialization to help boost the country’s economy.

Speaking at a media roundtable engagement in Accra on Tuesday, Thyssenkrupp’s Chief Executive Officer (CEO) for Sub-Saharan Africa, Dr. Philipp Nellessen revealed that they hope to partner with government and local industries in their quest to build their West African hub in the country.

Among many other things, the multinational company wants to invest in the Chemical and Fertilizer Industry and have plans to put up a full-scale fertilizer plant.

To throw light on that, Dr. Philipp Nellessen in an interview with Modernghana on the sidelines shared, “It’s basically part of our program portfolio that ranges from the petrochemical or from the chemical side all the way to the mining site. Especially on the chemical side, we have a lot of technology that can build the basic building blocks of any economic development. Aside from the fertilizer plant producing, but also producing basic chemicals you need in industrialization effort”.

In addition to that, Thyssenkrupp has assured its commitment to offering Mining technologies to boost the mining sector and is bent on extending its training programs locally to invest in the training skills of young people.

It’s beyond debate; Akufo-Addo has completely mismanaged Gha...
10 minutes ago

My morale is down – Angry Inspector reacts to mass promotion...
14 minutes ago