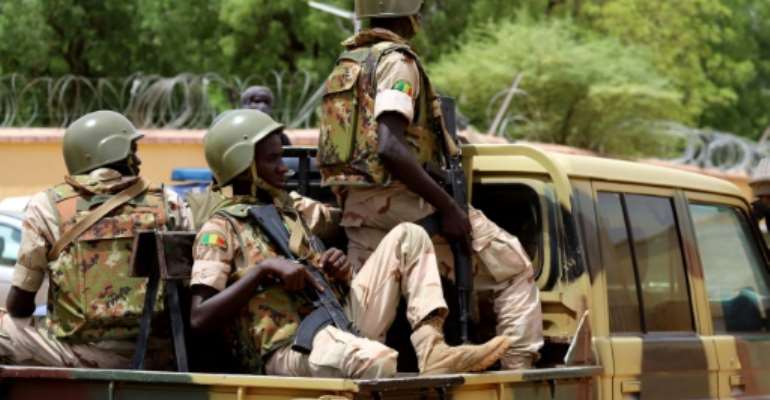 Members of the Mali Armed Forces (FAMA) patrol in the streets of Gao, in central Mali, in July 2019. By Souleymane Ag Anara (AFP/File)

A large contingent of Malian troops, backed by air support, fought Tuesday with jihadist fighters who made an incursion into a military camp in the country's fragile central region, sources said.

Two military posts came under attack at dawn on Monday at Boulkessy and Mondoro, towns near by the border with Burkino Faso.

The assailants at Boulkessy are "suspected members of Ansarul Islam", said G5 Sahel, a five-nation joint taskforce created in 2014 to try to tackle jihadist violence in the region.

The Malian army has not yet reported an official death toll, but a local official told AFP that two civilians were shot dead in Boulkessy.

A military source said that Malian special forces had been active around Boulkessy.

The source said that air support was bolstering troops in Boulkessy, while reinforcements had left Mondoro.

"We currently have deployed a large amount of resources to take back two positions... in Boulkessy fallen into the hands of terrorists," said another military source.

A local official in a nearby town confirmed that he saw a Malian army helicopter headed towards Boulkessy.

The fate of numerous soldiers caught in the fighting remained uncertain on Tuesday, according to several military sources.

But much of the region remains chronically unstable and jihadist-led violence has spread to the centre of the country, often sparking bloodshed between ethnic groups.

Neighbouring Burkina Faso and Niger have also been infiltrated by insurgents, at the cost of hundreds of lives.

Ansarul Islam has been accused of numerous attacks in Burkina Faso since emerging in the border region in 2016.