Is English A Trap-Door For Us Or An 'open Sesame'? 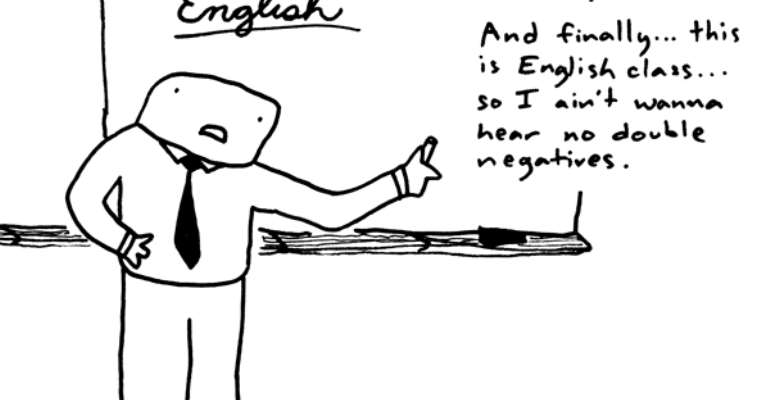 Those who know about educational systems tell us that the very first lessons a child is taught in school stay in his or her mind for life.

I agree, for I can still remember our Class One teacher telling us that if we were writing on our slates with chalk and we made a mistake, we shouldn't spit on the slate to wipe off the mistake but just cross it out.

Simple enough rule, what? Wrong! Well, many pupils didn't want to reveal to the teacher that they had at first thought that (say) 2+2 = 5! So they clandestinely tried to rub out the mistake – using sputum in small quantities and hoping that the teacher wouldn't notice. Invariably, he noticed, of course, and gave them a good walloping for disobeying his orders.

When the time came for us to be given exercise books and taught how to use pencils to write in them, we were again warned not to use erasers (they often didn't work well) or worse, the blunt end of the pencil, or worst of all, our wetted finger-nails (!) to rub out our mistakes but to neatly cross them out.

But, again, our vanity impelled us to try and hide our mistakes, and we often ended up creating dirty black spots in our exercise books. Some of us tried so hard to rub out our mistakes that the pencils actually tore holes in the paper. More walloping followed, of course.

Therefore, many of my classmates were usually miserable in the first few months of our schooling. Everything seemed to us to be a trap waiting to spring at us and deliver us to the teacher's whip.

Yet, only a few months earlier, we had always woken up in the morning with a smile on our lips, anxious waiting to trot off from home with alacrity to go and out and play all sorts of very nice games with our playmates.

Our favourite games were Tumatu; akcnkccdi3; mpuni; and nt3: the first was a game in which we skipped on one foot into and out of boundary marks we had drawn on the ground. If your foot landed inside somebody else's “territory,” or even touched a line of the boundary, you were faulted. Too many faults and you were taken out of the game. The skill needed to skip all the way from the bottom mark to the topmost one without infringing somebody else's “territorial integrity”, was quite considerable and so the triumph of "conquering territory" was very enjoyable. The game could last all day. Well, unless one's mother invaded the playground angrily to pull one out and took one back home to complete neglected tasks.

The second game was even more exciting: you had to rise up very early in the morning and go into the nearby forest, where trees like onyina,and odum grew luxuriantly. One of these trees grew flowers called akcnkccde3. These flowers were pink in colour and very beautiful to look at. Birds loved the juice concealed in the flowers.

But for us, the attraction of the flowers lay in the fact that the flowers were implanted in thick stamens that served as little open “cups” when the petals were pulled out.

The game involved rolling these stamen “cups” deftly with our fingers towards the “cups” of other players. If your “cup” was able to climb on to another child's “cup”, or better still, jump up to sit in his “cup”, then you had won! The prize was to seize the "vanquished" cup. Whoever collected the most cups was declared the victor.

The cups were so valuable that we rose up very early to go into the bush, in order to be ahead of other would-be collectors of flowers that would have fallen from the trees overnight. By an ancient code, one had to yell "ODIE!" ("Got it!") as soon as one spotted a flower. That warned "smart-alecs" nearby not to try to outrun one and pick up the flower. Of course, there were a few really bad eggs who would always try to outrun one. Needless to say, this behaviour invariably brought on a fight.

We could play this game all day without getting tired of it.The thrill of it lay in the clever "tactics" that needed to be used to get one's cup to become invincible. It had to obey one's fingers when asked to "climb" into other people's cups. Or to adroitly escape attempts to "capture" it. For us children, these skills turned the game into one made in heaven itself!

Another favourite game, Mpuni,was a much less demanding game, as far as skill was concerned: we just cut the midrib of a banana or plantain leaf into short strips and tried to pierce a whole pile of them together by stabbing them hard with a long, sharp nail. The more pieces one was able to "nail", the better a player one was adjudged to be. . Counting the pieces to ascertain who "superior" in that he had got the largest number of pieces with his nail, often led to a nice little dispute that might lead to a fight! I mean: we were so competitive! These were not things to eat, or anything of the sort. Yet we regularly fought over them.

Later, as grownups, we turned this game into “something called bottle-tops”. You pitted the tops that came from a bottle of beer against another person's collection. Whoever was able to make his beer-tops “climb” those of an opponent, won the game. Lovers could determine the position they wanted to adopt during love-making by the outcome of this game – the winner could demand whether to be in the “top” position, or be “underneath”1

Nt3 was the most intricate game of all. We had to go far into the forest in search of the the beautiful brown nuts produced by a peculiar climbing plant called nt3ua. We called the nuts “marbles” and when we brought them home, we applied fire to soften parts of the skin. We then bit into the softened skin with our teeth to create “legs” for the nuts. The skill used in making these bite-legs determined the adroitness with which the nuts "danced."

The "dance floor" was a platform of about three feet in diameter with a dipped middle, expertly constructed with a straw mat and rags. What we did was to twirl our marbles in the dip in mat, to make them “dance” round and round. Other players would then join in the dance and try hard to knock the marbles already on it off to the ground. They “captured” any marbles that they succeeded in knocking down, off the mat.

There was nothing one could do when one's marble was knocked out by that of a better player, except to cry "foul" if one claimed that the knock-out had been procured by "unfair" means. There were many rules in the game to ensure “fair-play”: one couldn't use too much force to knock down a dang marble, for instance. But what was "too much force"?t Who was to distinguish a "clean" shot from a "foul" one? Usually, there was an "umpire" called the game "chief", who could adjudicate over over "legitimate-shot-versus-foul-shot issues. But he was also a fellow-player and his decisions were often challenged. Then, the matter would be settled by fisticuffs,

You will appreciate the difficulties involved when you consider that (for instance) if a player's marble is knocked off the mat by another player after "too much delay", the offended player could proclaim the offender to be "a female!" . A player accorded "female" status could not continue to participate util the charge had been investigated by the "chief" of play and his "masculinity" reaffirmed!

Haha – imagine the argumentation that occurred among five or six boys, each of whom belonged (secretly) to a “gang” [including the chief!] whose members would support him, come what may. (In fact, sometimes, often, the "chief" was only made a "chief because it was who brought the mat for making the platform on which the marbles danced, r else the game was taking place in his house. So he was not always a person of impeccable impartiality. Thus, fisticuffs often accompanied the outbreak of disputes in the marble games, just as they did when we played football!

So, because our pre-school lives were full of excitement. and stimulation, school to us a huge damp squib. The children classified as “dull” pupils, who could not cope too well with absorbing the new knowledge the teacher was conveying to us (we cruelly described them as being in possession of “dead brains” ("wcn tiriawu"!!) suffered the most. We said they had "dead brains", but usually, they were the cleverest children when it came to games and other outdoor activities. So, in real fact, schooling alienated us from our natural incinations.

We learnt everything by rote: addition and subtraction; the multiplication table; short and long division; how many pence made a shilling; how many shillings made a pound. And difficult multiplications and divisions of these denominations of the British currency in use in the (then)God Coast. There were also weights and measures: pounds, stones, hundred-weights and tons; then inches, feet, yards, furlongs and miles! And there was also, the not-so-little matter of "fractions".

That was not all – as we were in a Presbyterian Mission school, we were also required to to memorise long Bible passages (known as “catechism”) as well as hymns. As failure in any of these rote exercises by rote was punished with caning.' it occurs to me that perhaps these missionary schools were not a fertile ground for breeding sadists in our society. For it was generallyaccepted in my time that pupils in school could be mercilessly whipped for all sorts of offences; especially, for failing to regurgitate what they had been taught. by rote. So the children also learnt from their “betters” (i.e. teachers) that it was acceptable and sanctioned by the Bible, no less) to engage in brutal behaviour "when necessary".

In Ghana today, we see an underlying unconcern for the welfare of our fellow humans. A so-called “prophet” kicks a pregnant woman in the stomach ostensibly; to cast out "evil spirits" in the unborn child. A video of this horrendous act goes viral. Yet no-one takes action against this “prophet”. What can we expect of a society that allows such people to become its “spiritual guides” to thousands?

More beating occurred when the principle of learning by rote was applied to the teaching of English, too. Here we had to translate our thoughts from our indigenous languages to a foreign one, and the results could often be extremely comical – as you will see in the next article.