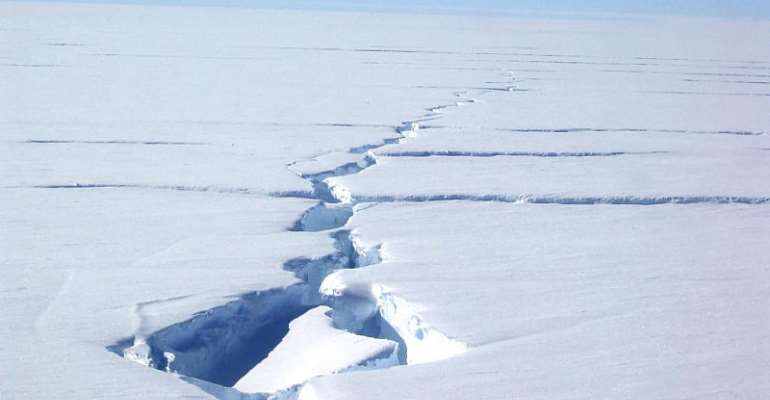 Antarctica's Amery ice shelf has produced its biggest iceberg in more than half a century.

Scientists have named the iceberg D28, saying it will need to be closely tracked because it poses a potential danger to ships.

“Events like this happens maybe once or twice in our lifetime,” says Ben Galton-Fenzi, a glaciologist with the Australian Antarctic Division, adding that this particular part of Amery – nicknamed the “Loose Tooth” – has been the focus of a lot of study.

“These glaciers are several kilometres thick when they flow off the continent, and as they flow out over the ocean they're spreading and deforming and oozing their way across.

“That's the process that can cause the rifts … if they're spreading faster than what the ice can keep up with, they'll want to crack.”

Although it was expected that this iceberg would break off, it didn't happen exactly when and where scientists thought it would.

“The Amery ice shelf calved an iceberg, the baby was late and it wasn't actually the baby we expected,” says Galton-Fenzi, adding that experts predicted a part of the Loose Tooth would calve.

In the end, the ice that broke away was to the west of that and was bigger.

Ice shelves – platforms of floating ice that form where an ice sheet meets the ocean – act as a barrier to glaciers transporting water to the ocean. When they are lost, sea levels can rise.

While the calving of D28 is a natural event, not linked to climate change, its departure risks affecting the stability of Amery – Antarctica's third-largest ice shelf. The AAD will be watching closely to see how the ice reacts.

Because Amery is considered a stable part of the continent, which hasn't been thinning or experiencing changes to its flow, the way it responds to the loss of D28 will be of keen interest to scientists.

“We already have a lot of instruments out there on the glacier measuring how fast the ice is flowing and melting from the ocean below,” explains Galton-Fenzi.

“Now we have a natural experiment and we'll be able to understand the impacts on the ocean and how that's going to influence the flow.”

What will happen to D28 itself it uncertain, though it will likely be transported out through the ocean currents and into much warmer waters, where it will eventually break apart and melt.