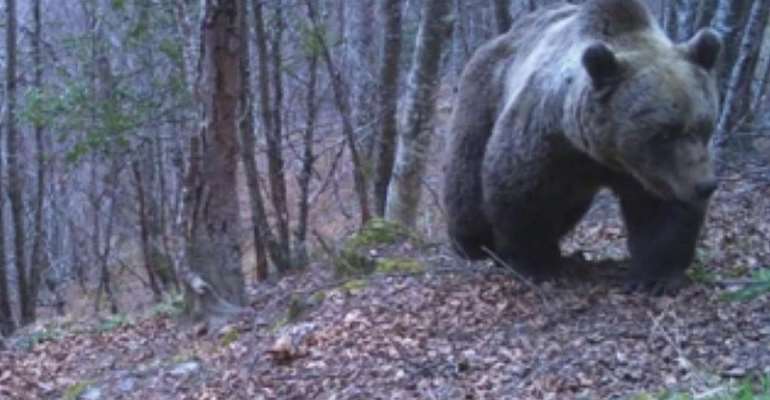 A French government plan to boost the brown bear population in the Pyrenees is causing concern among farmers about attacks on their sheep and raising anxieties over the future of the mountains. In the first of a three part series, Michael Woods, exlores the issues around the govenment plans.

Coexistence of bears and humans in the Pyrenees is an old story: paintings of the predators have been found on the walls of prehistoric caves, and shepherds have been wary of them since at least the Middle Ages.

In the twentieth century, the large omnivores were hunted to near extinction as humans expanded roads, settlements and farming practices into the mountains. To stop them from disappearing, the French government began relocating brown bears from Slovenia in the mid-1990s.

In terms of conservation, the plan has been a success: their numbers have grown from a half dozen to an estimated 45 to 50.

But for just as long, farmers have raised alarm bells over the impact of bear attacks on their herds, particularly during the summer months when animals are sent to graze freely in mountain pastures.

Farmers say attacks are out of control
Concerns are particularly strong in the department of Ariege, where a majority of the bears have converged.

This year, some parts of Ariege have suffered deadly attacks on individual or groups of sheep almost every day. Bears have also been blamed for scaring herds into running blindly off cliffs by the dozens or hundreds.

“If there were just a few, there would limited damage, but it's getting to the point it's out of control,” says Joel Seguela, a sheep farmer who sends his herd to the mountain above the town of Siguer.

He has been working at Siguer for three years, partly in hopes of avoiding bear attacks, but he knows nowhere is without risk and wonders about the future of his practice.

“If the mountain becomes complicated, and we have fewer sheep or sheep in bad shape at the end of the season, it's not worth it.”

Farmers warn that if this happens, it will impact more than their own livelihoods. As is the case in many of France's mountain regions, the Pyrenean mining and manufacturing sectors have declined, and agriculture and tourism are the main sources of revenue.

“If there are no farmers or sheep to keep the mountain clean, tourism will suffer, as well,” says another farmer, Jean-Luc Peille.

Difficult to adapt
Farmers say the landscape that makes the region so suited to transhumance, the practice of sending herds to graze in high pastures during the summer, also makes it difficult to adapt to the bears.

“The Pyrenees, especially in Ariege and the Hautes-Pyrenees, have varied terrain that's good for sheep, because they like rocky areas and they make the most of the grasses,” says Sophie Alzieu, who heads the group of 10 farmers working at Siguer.

“But these places become dangerous if a bear comes. One scare is all it takes, and you find sheep piled at the bottom of a cliff.”

To help adapt to having bears around, the French government offers funding for training Great Pyrenees guard dogs, installing protective fences and hiring of shepherds to spend the summer living in the cabins that dot the mountain terrain.

But farmers say the landscape makes it difficult or sometimes impossible to use these measures effectively, especially when it comes to protecting sheep, which tend to spread out in small groups across pastures stretching up to 3000 hectares.

“If they're kept too close together, they're easily bothered and they don't make the most of the mountain,” Alzieu says. “The idea of the high pasture is that they eat what they want and where they want. We're there to watch over them, but not to impose their route and diet.”

Reports of attacks double
Many in the region are calling for the bears to be removed, and opposition has intensified over the past two years.

In Ariege, the number of reported bear attacks doubled between 2017 and 2018, and twice as many sheep have died in suspected bear-related incidents so far in 2019 compared with the same period the previous year.

Conservation groups say not all these cases will prove to be bear-related and that the figures have more to do with the anti-bear sentiment in Ariege. But state services acknowledge there has been long-term rise in the number of attacks, while also noting how abruptly opposition has grown.

“The general trend over the past 10 years is that the bear population has grown, as have the number of damages,” says Nicolas Alban, regional director of France's national office for hunting and wildlife (ONCFS), whose agents are responsible for analysing sites of suspected attacks for signs of predators.

But, he continues, “There has been no particular change as far as bears are concerned this year. What has changed is that a small group that has become radical in its methods.”

ONCFS agents suspended their visits to mountain pastures in two small sectors of Ariege in July after tensions with protesters reached a fever pitch.

“After several acts of vandalism on our vehicles, threats, insults, intimidation, we had one of our vehicles set on fire,” Alban says. “We were no longer able to assure our agents' safety, so we decided to suspend our analyses in two valleys in Ariege.”

Some say coexistence is possible
Alban notes that such incidents do not reflect conditions in general, and that the majority the estimated 700 analyses in Ariege this year proceed calmly. And not everyone working in agriculture is opposed to the repopulation effort.

“I want to work with the bear, because it's an honour to live with this animal in my mountain,” says Mario Barbosa, a shepherd who has spent three and a half months tending to the sheep on the mountain above Siguer.

“I know it can be hard, I can lose some sheep, but every year, many sheep die in the mountain for other reasons than bears, such as accidents,” he says.

Barbosa knows the mountain well, because his parents used to keep their own herds at Siguer. His mother, Catherine Brunet, is one of few in the community to publically argue in favour of coexistence and the proposed protective measures. Now retired, she recalls getting along fine during the two years when a bear was known to be in the area.

“We had too many sheep to use the protective measures properly, so we started by making the herd smaller,” Brunet explains.

“We set up a fence and stopped the local practice of letting the sheep roam freely. It took some time to set up and be really efficient, but once we got how it worked, it was great to know the bear was there and that guard dogs would prevent it from approaching. And there were no problems.”

Future of mountains at stake
Brunet's activism has made her a target for the most virulent opponents of the bear programme. In a book published in 2017, La Bergère et l'ours (The Shepherdess and the Bear), she describes finding her tires slashed and her car and property tagged with insults during her many years defending the repopulation effort.

For defenders of the bear programme, the opposition to bears is misplaced frustration.

“The real problem today, bears or no bears, is that small farms are disappearing and big farms and multinationals are taking over,” says Florence Cortès, a Green Party activist and publisher of Brunet's book. “The bear is a pretext, unfortunately.”

Although the farmers and shepherds at Siguer have differing views on the bears, no one wants to stop bringing sheep to the mountains. But the models and visions for farming in the Pyrenees are so different, it is hard to know how to find the right balance.

“If we stop going to the mountain, the consequences will be hard to reverse,” says shepherd Antonin Bernard, warning it would take a generation to rebuild the pastures if they are neglected for even a short time. But he is open minded about bears.

“Maybe the bear will help us respect nature again,” Bernard says. “At first the bear seemed like an enemy, but maybe it will be an ally.”