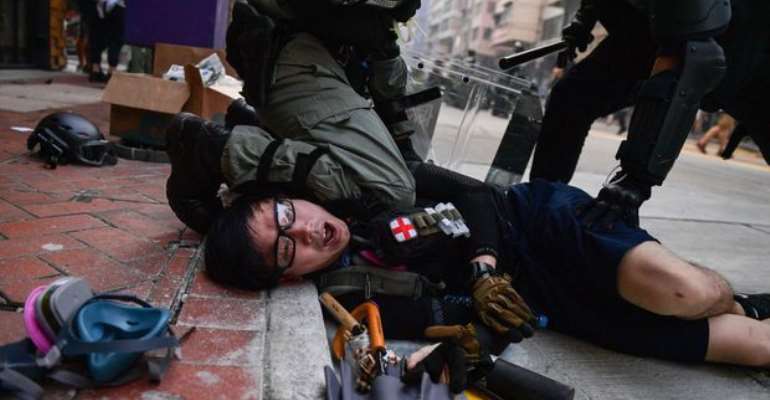 According to a report in Hong Kong, a demonstrator was shot by the police with live ammunition. According to the Hong Kong newspaper "South China Morning Post", the man was shot in the chest in the Tsuen Wan district, citing an unspecified source. His condition is said to be critical.

A photo published on the newspaper's website showed a bleeding man being cared for by rescue workers. A video distributed on Twitter is supposed to show the scene. A policeman fires from close range.

This video captures the moment a police shot a live round at extremely short distance into a protester’s chest.

The South China Morning Post reported that police fired at least five pistol shots on Tuesday. Two warning shots were fired after police officers were attacked by a group of demonstrators. According to the newspaper, a total of 15 injured people have so far been admitted to hospitals.

Tens of thousands on the street again
Tens of thousands had once again taken to the streets in Hong Kong for democracy and human rights. The occasion was the celebration of China's 70th birthday. During the protests, radical demonstrators clashed with the police in several places. Activists blocked streets, threw cobblestones, set fires and threw incendiary devices. The officers used tear gas, truncheons and water cannons.

The demonstrators marched through the streets of the Chinese Special Administrative Zone despite a ban by the authorities. "Freedom for Hong Kong", the demonstrators, mostly dressed in black, shouted and sang the anthem of the protest movement. Demonstrators also gathered elsewhere in the former British crown colony with its seven million inhabitants for peaceful protests.

The demonstrators demand an independent investigation of police violence in the protests that have been going on for five months, an amnesty for the more than 1,500 arrested so far, a withdrawal of the classification of their protests as riots and free elections.

Some streets and subway stations are closed
"We fight for freedom and democracy," said a demonstrator named Ramon. The Communist Party does not grant people free elections, and freedom of assembly and speech is increasingly restricted.

In anticipation of the riots, the authorities had already closed some streets and subway stations in the city centre in the morning. The South China Morning Post reported that at least 6,000 police were on standby. Several large shopping malls and hundreds of shops in the city remained closed, and some hotels advised their guests to stay indoors.

Since its return to China in 1997, Hong Kong has been governed autonomously with its own constitution. The Hong Kong people are under China's sovereignty, but - unlike the people of the Communist People's Republic - they enjoy more rights such as freedom of opinion and assembly, which they now fear for.