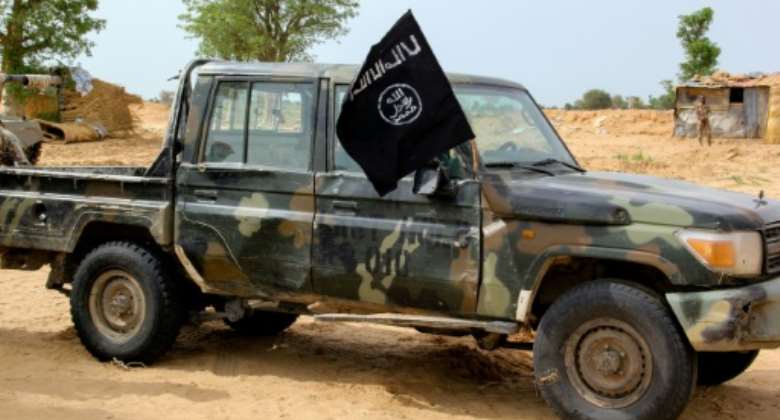 The Islamic State West Africa Province (ISWAP) group broke away from Boko Haram in 2016 and has ramped up attacks against the military since last year. By AUDU MARTE (AFP/File)

Jihadists killed five members of a civilian militia during an attack on a town in conflict-hit northeast Nigeria over the weekend, security sources said Tuesday.

Fighters aligned to the Islamic State group on Sunday launched an assault on Gubio in eight pickup trucks fitted with machine guns, sparking an hour-long firefight.

"Five of our comrades were killed in the attack," anti-jihadist militia leader Babakura Kolo told AFP.

Militia leaders and a military officer dismissed a claim from the Islamic State West Africa Province (ISWAP) group that it had killed and wounded 18 soldiers in the weekend attack.

More than 100 vigilantes and local hunters from the region had been sent to the town in recent days to protect it against incursions from ISWAP.

The redeployment came amid a new strategy by the military that has seen soldiers pulled back into "super camps" in a move critics say leaves towns more vulnerable to attack.

Gubio, 80 kilometres (50 miles) from the regional capital Maiduguri, has been repeatedly targeted by the jihadists.

On Wednesday at least seven Nigerian soldiers were killed when their convoy was ambushed by ISWAP jihadists outside Gubio, according to a senior military officer.

It has ramped up attacks against the military since the middle of 2018, repeatedly carrying out deadly strikes against soldiers.

The decade-long conflict has killed 35,000 people and displaced around two million from their homes in northeast Nigeria.