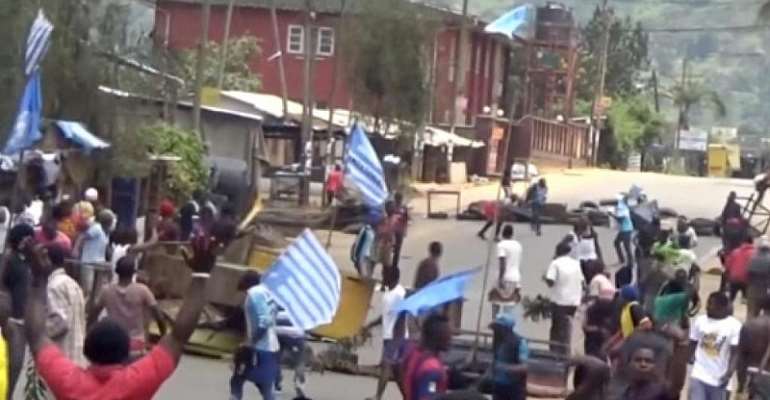 Cameroon's five-day national dialogue on the Anglophone crisis started on Monday against a background of hope and scepticism.

On Monday, around 1,500 guests gathered at Yaounde's Palais des Congrès to attend the opening ceremony of the national dialogue, meant to put an end to the internal conflict opposing the government to the English-speaking regions in western Cameroon.

Clashes between the army, insurgents and civilians in the past 3 years, led to the death of 3,000 people, half a million displaced Cameroonians and 40 thousand refugees.

President Paul Biya, in power for 37 years, announced the dialogue on 10 September during an address to the nation. He said he hoped the national dialogue would help satisfy the “high aspirations of people of the north-west and south-west regions, but also of all the other components of our Nation”.

Prime minister Joseph Dion Ngute who chairs thenational dialogue said, in his opening speech on Monday, that the alarming state of the crisis should compel the delegates to reach concrete results by Friday. He again condemned the secessionist project, echoing the views of President Biya who did not attend the meeting.

The main topics tabled for five days of talks in various commissions are bilingualism (Cameroon has two official languages, English and French); decentralisation; reconstruction and disarmament.

Some participants have told RFI that five days is not enough to get out of a deep-rooted crisis. “It looks as if the government wanted a publicity stunt but this a complex process where the future of our country is at stake”.

The government says that there has been a series of pre-consultations led by the prime minister. As a result they have already laid out proposals which are going to be discussed in the eight commissions set up for the major national dialogue.

Secessionists' boycott
The secessionists, the key figures in the Anglophone crisis, are boycotting the talks. They want the dialogue to be held on neutral ground, outside the country.

“Some of them face arrest warrants,” explains Denis Nkewbo, the president of the Cameroon Journalists' Trade Union. “They don't think it is safe for them to come to Yaounde.

“The key actors are in the bush, fighting the military. They say that this dialogue is controlled by the government. They claim that they did not get enough guarantees concerning their security and want written ones.”

The absence of armed insurgents is bound to impact talks, namely when it comes to the disarmament, demobilisation and reintegration of former combatants.

►Cameroon: I spent a week embedded with Anglophone armed separatists

Nkwebo says that, even though the secessionists will not take part in the discussions, their demands, including that of federalism, will be voiced by the participants in Yaounde.

Influential figures such as Cardinal Christian Tumi, the archbishop of Douala, who is viewed as a moderate Anglophone, welcomed the government's initiative and urged the secessionists to participate.

Maurice Kamto, the leader of the opposition Movement for the Renaissance of Cameroon, is also not attending the national dialogue as he was arrested in January on sedition charges. His party boycotted the talks.

At the end of the first day of the national dialogue, lawyer and politician Akere Muna, leader of the NOW movement, slammed the door on the talks.

He was already sceptical about the process when he spoke to RFI on Monday morning.

"I stopped attending because everything looks completely stage-managed," he told RFI on Tuesday.

"The government is smoking its own exhaust and getting high on it!"

Muna added that he was taken aback when the prime minister said that the Anglophone crisis started in 2016.

In his view, the complaints voiced by the Anglophone regions started back in 1964, three years after reunification.

“What we had in 2016 was just the symptoms of what the Anglophone crisis is all about,” he continues. “It will be dangerous for us to confuse the symptoms with the causes.”

But, Joshua Osih, the vice-president of the Social Democratic Front, told RFI that the "biggest achievement" is the national dialogue itself.

"It's an event called-up by a party to the conflict that didn't recognise the need for dialogue or the gravity of the situation," Osih said.