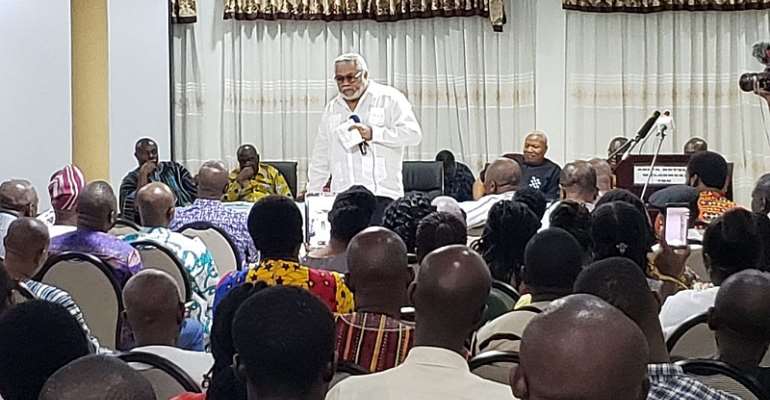 According to him, his sad and hopeless situation was not different from his dear wife, Nana Konadu Agyeman Rawlings, the former First Lady.

Mr. Rawlings said he and his wife didn't even have one dollar in their accounts as they did not even own a foreign account abroad like other politicians.

Addressing the annual National Cadres Conference at Ejisu in the Ashanti Region on Saturday, he said he and his wife were not corrupt and that was why they left political office very poor.

He said he ruled the country for about 19 years and added that he had every opportunity to also amass wealth as other politicians do but he did not do it because he is a man of integrity.

Mr. Rawlings added that he eventually opened a foreign account after he had left political office, following a UN assignment proposal by the late Kofi Annan who was then General Secretary of the United Nations.

“It was after I had left political office when the then UN Secretary General, Kofi Annan, approached me with a UN international assignment proposal.

“This assignment required that I had a foreign account so I contacted my wife and we eventually opened a joint foreign account after I had left political office,” he disclosed.

Mr. Rawlings stated emphatically that he came into politics from day one with a clear determination not to indulge in corruption and he perfectly delivered on that.

“I am not corrupt. This is JJ and I know where I come from,” he said, stating categorically that he has not changed one bit even after leaving office.

According to him, corruption is not in his DNA and so no matter the challenges that he would face in life, nothing would force him to become corrupt.

Mr. Rawlings said he spent most of his time and energy in political office to ensure probity, accountability and justice for the people, who owns the power.

The programme was graced by some top-notch National Democratic Congress (NDC) members, including Asiedu Nketia, the party's chief scribe.