The Roots of Hong Kong's Crisis 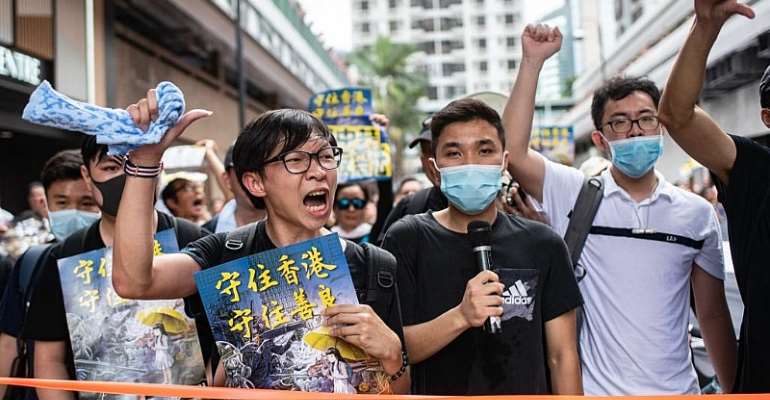 Hong Kong, the pearl of the East, yet lives in such a turmoil. The ongoing political crisis and massive protest have drawn a large amount of international concern and attention. There are multiple explanations of what has happened in Hong Kong. Some may say it is for a “wider demands for democratic reform.”[1] On the mainland side, some may argue, “'The demonstrations in Hong Kong are not about rights or democracy. They are a result of foreign interference.'”[2]

However, people ignored another very important perspective of the protest in Hong Kong, economics. Hong Kong does have a strong economy, it still plays an important role in international trade and financial services. However, under prosperity, there are extreme challenges that will lead to explosions in Hong Kong society. The unbalanced economic development, enlarged inequality, and the failure of the Hong Kong government addressing economics issue fueled the anger of the people and dragged Hong Kong into the ongoing crisis. The extradition bill, in my opinion, is just the spark that ignited the society's anger.

Unbalanced economic development was a major issue of Hong Kong in recent years. When we look back into the history of Hong Kong, the economic booming started from the 1950s and 1960s when Hong Kong enjoyed economy booming. Hong Kong economy had the opportunity to grow in those eras by developing textile industry, electric industry, and light industry. Manufacturing became Hong Kong's main industry until the 1970s when finance, real estate, and trade pick up the main role in the Hong Kong economy. The Reform and Opening in China in 1979 further fueled the development of Hong Kong in trade and finance. Currently, financial services, tourism, trading, and professional services and other producer services are the four main industries of Hong Kong.[3] These industries have attracted 47.3% in the labor force and contributing 57.8% of the GDP.[4] However, the problem is that there is the only limited spot of high paying jobs in these industries. Many of these jobs either require higher education or does not have enough positions available for the people. According to Hong Kong government statistics, the 4 major industries are having fewer jobs opening. From 2013 to 2017, these 4 industries has only created 20,000 new jobs while more than 100,000 people joined the workforce.[5] The rising of China as an international economic powerhouse has made Hong Kong even less competitive in these traditional advantageous industries.

The unbalanced economic in recent years led to extreme income inequality within Hong Kong. While the high paid job in these industries is decreasing, it is harder and harder for regular people to live day today. Hong Kong's Gini coefficient has reached 0.539 in 2017, the highest in 45 years.[6] This is also one of the highest in the world when it comes to the Gini coefficient. The highest monthly income is 60,000 Hong Kong dollars, about $7,700 more than the lowest.[7] Meanwhile, Hong Kong has the second[8] most billionaires, and 4th[9] most millionaires living in the city. Yet, the poverty rate in Hong Kong, in 2017, is 19.9%. The medium monthly income is a mere $2,200, comparing to its GDP, it is a relatively smaller portion. We have seen all over the world of the harsh living condition in Hong Kong for some of the poorest people. Only in Hong Kong will you see people living in cage housing. The richest of the richest has made more money than ever in Hong Kong while every day people suffered from loses. This will build up anger and instability in society.

Now, people may ask, did Hong Kong have the opportunity to avoid all these economic development issues? Yes, there were many opportunities, but the Hong Kong government missed almost every single one of these opportunities. The failure of the Hong Kong government has worsened the unsatisfactory in Hong Kong. Back in the earlier days, Hong Kong executive officer wanted to promote the manufacturing industry and public housing programs to provide a more diverse economy and housing opportunities for those who cannot afford to house in regular prices. However, none of these opportunities was ever successful. On the real estate perspective, in the first policy address for the Chief Executive, Tung Chee-Hwa, has promised to build 85,000 affordable housing for the public. However, the program has failed due to the mass protests from middle-class Hong Kong residents who lost drastically in the real estate market. The cancellation of Public Housing programs between 2004 to 2014 has made the housing affordability even worse. In the diversification of the economy, the Hong Kong government also failed. Tung Chee-Hwa also tried to promote programs such as Cyberport, a program that will help Hong Kong to develop a solid technology industry. However, the program was born in the wrong time, right before the explosion of the internet bubble. Also, the leading developer of the project, Pacific Century Regional Development, made most of the project by real estate projects in this project.

Hong Kong's problem is a political issue within itself right now. However, the economic perspective is also something that we should be keenly aware of. We all understand very clearly, that when the economy is maintained in a bad shape, when there are not many opportunities left for young people in the labor market, or in the society as a whole, something will happen. These feeling of loss in Hong Kong eventually became the anger towards the government, and the Extortion Bill was just the spark that ignited the social conflicts within Hong Kong.

Henry Huang is a Campus Fellow at the International Institute for Peace, Democracy, and Development. He lives in Washington, DC where he is a student at the George Washington University's Elliott School of International Affairs