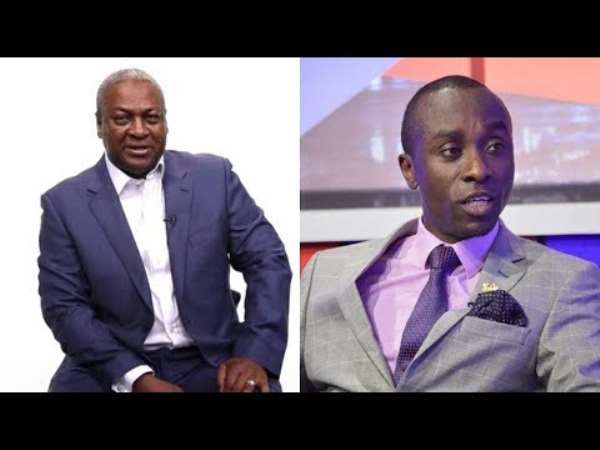 I was quite puzzled to listen to former President Mahama make a mockery of the destabilization of the state, and posess the question as to whether 'Bentua is now a weapon in coup plots in Ghana.

Am I am truly hearing this comment coming from John Mahama the pauper-politician, who once thought that he possessed the magic wand to wish away the nation’s problems? Is this the same gentleman who wrote a book about "coup d'tats? Didnt he write about his Second Coup D'tat and then went ahead to topple President Mills in bloodless and weaponless coup to become President?

I've always known Mahama to be one big mistake for Ghana but never thought he could sink this low, so much that he would question the veracity of the attempted destabilization of the state.

Can Mr Mahama tell us the kind of weapon used in the coup against President Mills?

It is very sad a person in the stature of the John Mahama, someone who once occupied the highest office of President would stoop so low and make mockery of a serious issue as coup plot against the state.

In any case, does Mahama and his cronies really want to have a discussion about weapons used in destabilizing the state? Okay, can we can start with the curious case of Charles Antwi, the man who almost assassinated President Mahama in church? What was he tried for, and what were the charges against him?

So what is Mahama talking about?
Mahama gets sicker and crazier by the hour. How does he forget that as president he incarcerated Charles Antwi for an attempt on he, Mahama's life?

Isn't it intriguing that Mahama and the NDC who have been complaining that Ghana is no longer safe are the same people ridiculing the state for clamping down on people who are manufacturing guns illegally with video and audio recordings showing their intentions of destabilizing the state?

How many times are we going to allow ourselves to be victimized by the unbridled folly of our experimental politicians like Mahama?

If he is the President is this how he is going to handle our national security? Was this man not the same person who threatened to use a sledge hammer to kill a fly in the Kennedy Agyepong saga?

And this is a man who want to come back to rule this country. How can we even entrust the security of Ghana into the hands of this man?

Mahama has nothing to give back to Ghana after his failed leadership. Ghana became another Orwellian failed state under his leadership. His inability to take strong, quick and decisive decisions were his bane, and he sunk Ghana into the state of lethargy because the people close to him were afraid to tell him he was NAKED. He should wake up to the reality that Ghanaians won't give him another chance to run the country further into a ditch.

Mahama’s comment must not be taken lightly. It is one of the many sad episodes in Ghanaian politics. In twenty-first century democratic Ghanaian politics, some of our so-called leaders have the habit of intellectualizing idiocy. They speak ill of commonsense where their nascent ideas are laid bare in the face, and their intellectuality questioned.

Fact is, the likes of Mahama who are mocking the failed coup attempt are part of the plot, and I urge the security agencies not to rest until all the conspiratorial plotters and their sponsors are smoked out.

The scheme to violently topple the current government must not be allowed to see the light of day as is the wishes of Mahama and his cohorts. We can't allow this to play out and wind up smelling like a rose. No. Let the state continue to act in the interest of our national security, and to hell with Mahama and his likes.