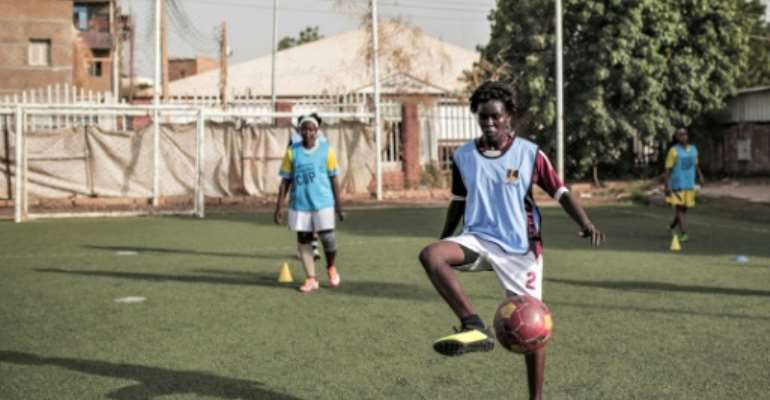 Women trained in Khartoum in August in readiness for the kick off of the women's league. By Jean Marc MOJON (AFP/File)

Sudan's first ever women's club football league kicked off Monday, with two teams clashing at a Khartoum stadium as crowds of fans and diplomats cheered.

The championship, which involves 21 clubs, would have seemed unlikely just months ago when long time Islamist ruler Omar al-Bashir was in power.

The first club match was played between Tahadi and Difaain in the capital on Monday. Matches are also scheduled for Madani, Al-Obeid and Kadugli.

The match was attended by Sudan's new Minister of Sport Wala Essam and some Sudanese and foreign diplomats.

"This is a historical game not only for women's sport but for Sudan," Essam told reporters.

"We will give special attention to women's sport and women's football."

The start of the women's club football league comes amid expectations that the current three-year transition period will see liberal policies implemented across the country, including measures to promote freedom of speech, women's rights, sport and arts.

Sudan joined FIFA in 1948. In 1957, Sudan co-founded the Confederation of African Football with Egypt, Ethiopia and South Africa at a meeting in Khartoum.

But women's football has faced an uphill fight since the country adopted Islamic sharia law in 1983, six years before Bashir seized power in an Islamist-backed coup.

Bashir was ousted by the army in a palace coup on April 11 on the back of nationwide protests against his iron-fisted rule.

A new joint civilian-military ruling body, called the sovereign council, is governing of the country for a transition period of 39 months.

The 11-member council has six civilians including two women.