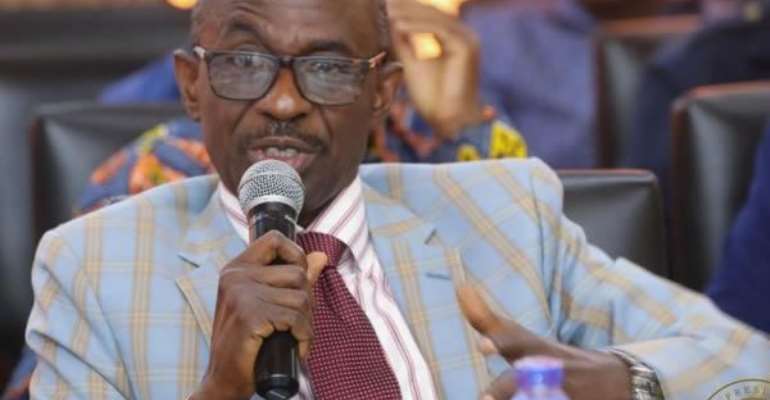 The General Secretary of the National Democratic Congress (NDC), Mr Johnson Asiedu Nketia, has said that President Akufo Addo and some members of his family and cronies are pursuing what he called a State-Capture-Agenda.

The agenda, as the NDC General Secretary explained, is to target critical and strategic national assets for capture and appropriation for themselves and their families.

Speaking at the NDC’s press conference Tuesday, Mr Asiedu Nketia said the fraudulent handover of the GH22billion assets of the Electricity Company of Ghana (ECG) by the Akufo-Addo/Bawumia government to Power Distributive Services (PDS) was informed by this nation wrecking agenda.

According to the NDC General Secretary, the real issues of state capture per his party’s investigations, “lit the spark for this whole PDS inferno that now threatens the Power Distribution Sector of Ghana.”

Mr Asiedu Nketia questioned by what locus and authority Mr Ken Ofori-Atta, who is the President’s cousin, wrote what he described as “a rather strange letter” to Lawyer Akoto Ampaw, a senior partner at the President’s law firm who is described in the letter the “Chairman of the Negotiation Committee” to consolidate the 51% Ghanaian shareholding under a so-called Special Purpose Vehicle to allow for other so-called Ghanaian investors to acquire shares in PDS.

The NDC’s curiosity
To this, Hon Asiedu Nketia said “We are convinced without a shadow of doubt that the needless, baseless and illegal attempt by Ken Ofori Atta to restructure the shareholding of PDS is nothing but a well calculated attempt by President Akufo-Addo and his relatives to appropriate the 51% Ghanaian shareholding in PDS for themselves with the objective of taking control of Ghana’s Power Distribution sector for the next twenty (20) years – up to 2039.”

He said for the three original shareholders – GTS Power Limited, Santa Power Limited and TG Energy Solutions Limited – this meant surrendering their shares to the new entity and that the Finance Minister’s justification of the directive on the grounds of protecting and preserving the indigenous ownership stake in PDS is untenable, especially since “the allocation of the 51% Ghanaian shareholding was approved by Parliament, and cannot be modified by anybody without recourse to the legislative body.”

He described the “excuse” of the finance minister as is “a fallacy,” asking if Mr Ofori-Atta is a shareholder, a beneficial owner or a conduit through which the President seeks to capture the electricity sector for personal benefit.

According to Mr Johnson Asiedu Nketia, the NDC is reliably informed that the three original shareholders were subsequently required to dilute their respective stake in this newly formed Special Purpose Vehicle, adding that per the new arrangement, they will collectively see their original 51% stake reduced to a paltry 11%.

He said the remainder of the shares will thus be apportioned to cronies of the President as agents who would hold the shares in trust for him and his family.

The NDC scribe said that was what infuriated the original Ghanaian shareholders who rebelled and refused to participate in the charade and that it is this defiance that outraged the Akufo Addo and he decided to occasion the suspension of the PDS Concession with the hope that the resulting pressure would force the compliance of the original shareholders.

He said the Akufo Addo faction’s plan which was to use the public outrage over the accusation to blackmail and bully the original shareholders to get in line backfired, exposing their wicked greed.

The NDC General Secretary also seized the opportunity to commend the USA Government for heeding to the NDC’s demand for an independent inquiry into the PDS matter, which has resulted in the FTI report.

Mr Asiedu Nketia also said, “We are also aware of frantic efforts by President Akufo-Addo to bring in EDF of France to takeover the assets of ECG in pursuit of his ongoing state-capture agenda.

“We hereby serve notice to the Akufo-Addo Government, that any attempt to use this scandal as an avenue to appropriate the assets of ECG for cronies and assigns of President Akufo-Addo will be fiercely resisted by the people of Ghana.”

It is clear from the above-enumerated facts that President Akufo-Addo, Vice-President Dr. Bawumia, the Finance Minister, Ken Ofori Atta and the Eson-Benjamin-led MiDA who superintended over this process are complicit and cannot be trusted to resolve this conundrum.