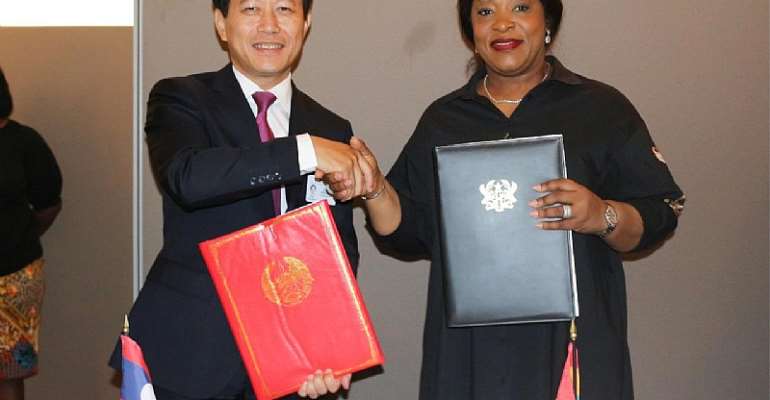 Foreign Minister, Shirley Ayorkor Botchwey, is pushing for the establishment of formal diplomatic relations between Ghana and Laos.

In her view, the creation of formal relations between the two States will set the tone for people to people exchanges and other forms of cooperation.

She stressed that the friendship and cooperation between the two countries is essential for their mutual benefit.

Madam Ayorkor Botchwey made the case as she held talks with the Foreign Minister of the Lao People's Democratic Republic, Saleumxay Kommasith on September 26, 2019 in New York on the sidelines of the UN General Assembly.

Laos is located in southeast Asia and is known for its mountainous terrain.

She briefed the Lao Foreign Minister on the economic agenda of the Government of Ghana, which is predicated on the transformation of the structure of Ghana’s economy beyond aid, import reliance and export of primary commodities to a manufacturing and value addition economy with the private sector at the center of the policy.

Madam Ayorkor Botchwey informed her counterpart that the Ghanaian Government’s policies have began yielding positive results which has reflected in the stabilization of the economy, the revival of business confidence, increased foreign direct investments and the rolling out of initiatives such as Free Senior High School and “One District, One Factory” programmes among others;

According to her, within the context of the policy of economic diplomacy, “Ghana Beyond Aid” means attracting the needed investments and opening up avenues for mutually beneficial trade within framework initiatives.

Furthermore, she highlighted the positive steps taken by Government of Ghana to attract investors into the country, namely Ghana Free Zone Act, tax holidays, repatriation of investment profits and reduced tax rate, among others and invited Lao businesses to take advantage of the business enabling environment to invest in the country.

On multilateral cooperation, she reaffirmed Ghana’s support for the Common African Position on the UN Security Council Reforms, stressing that Ghana would like to establish a reciprocal support with Laos for each other’s Candidature at the multilateral level