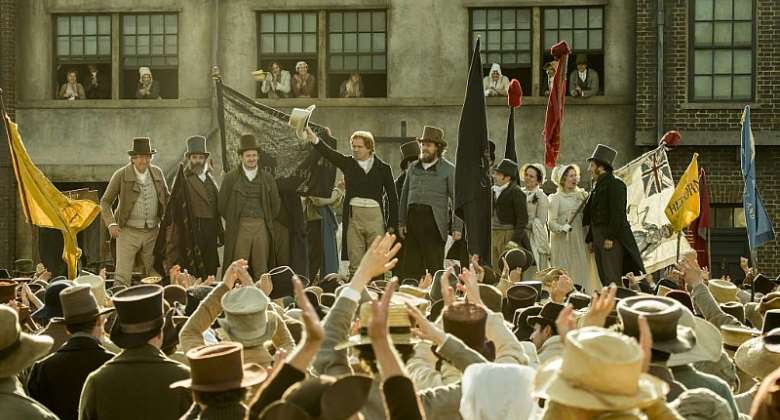 Mike Leigh's latest offering Peterloo is set in 1819. Soldiers killed 15 people and injured hundreds in a crowd of 60,000 unarmed men, women and children during a political rally in Manchester. The film traces an astounding route to that terrible moment.

Peterloo stars Rory Kinnear as upperclass political campaigner Henry Hunt, and, at the other end of the social scale, Maxine Peak as Nellie, a steadfast mother, wife, grandmother who struggles to keep her family sane, clean and fed in spite of war, poverty and repression.

The actors are meticulous in their portrayals of local men and women breaking into politics, magistrates and judges, some of whom are humane and enlightened, others dominated by those who are unkind and violently reactionary. Whether they speak as soldiers or the Prince-Regent, many of their dialogues are drawn from historical documents.

A new direction?
Peterloo is a departure in dimension from Leigh's films like Another Year (2010) or Happy-Go-Lucky (2008) which are mirrors of contemporary society contained in familiar urban shells. All however have in common their demand for the audience's close and active attention, their play on stretches of time or silence, the way they paint arresting portraits and their richness in colour and detail.

Peterloo reveals Leigh's capacity to test a different direction. He cannot be accused of resting on his Bafta, Cannes or Venice laurels.

Mike Leigh's Amazon-produced Peterloo had its very first public screening in France at the 30th Dinard Film Festival at the end of September 2019.