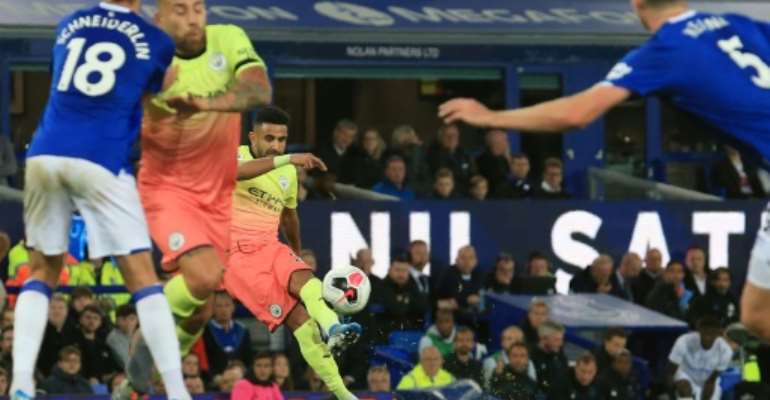 Algeria midfielder Riyad Mahrez (C) bends a free-kick to give Manchester City a 2-1 lead at Everton. By Lindsey Parnaby (AFP)

Goal scorers Riyad Mahrez, Karl Toko-Ekambi and Jamilu Collins were among the African players who starred at the weekend in the major European leagues.

Algerian Mahrez curled a free-kick into the net to give Manchester City the lead a second time at Everton en route to a 3-1 Premier League triumph.

Cameroonian Toko-Ekambi bagged a brace for Villarreal in a 5-1 La Liga rout of Real Betis and Nigerian Collins struck a superb goal for Paderborn in a 3-2 Bundesliga defeat by Bayern Munich.

The winger capped a superb display with the free-kick that inspired his club's win at Everton. Needing a victory to keep in touch with leaders Liverpool, Pep Guardiola's side had been pegged back to 1-1 when Mahrez stepped up to drive in a fine free-kick in the 71st minute. Mahrez, who has three goals this term, is on an excellent run of form since helping his country win the Africa Cup of Nations in July.

The Egypt winger has gone three games without a goal after failing to score in his side's hard-fought 1-0 win at Sheffield United. Salah has netted four times in 10 appearances in all competitions this season, but fired blanks in consecutive away games against Napoli, Chelsea and Sheffield. He should have got on the scoresheet in the second half, but fluffed his lines with a tame strike at goalkeeper Dean Henderson.

The Nigeria midfielder scored his first goal at the King Power Stadium since January to cap his team's 5-0 rout of 10-man Newcastle. For the first time since a defeat against Southampton under previous Leicester boss Claude Puel, Ndidi got on the scoresheet in front of the Foxes' home fans as he turned to fire low past Martin Dubravka in the 90th minute.

Toko-Ekambi scored twice and Nigerian Chukwueze once, as Villarreal thumped Betis. Toko-Ekambi put Villarreal in front shortly before half-time with a towering header from a corner and then made it 3-1 with 14 minutes left, guiding a smart finish into the net. Villarreal scored twice more in injury-time, with Chukwueze adding the fifth and final goal. He cut in from the right and picked his spot, digging out a bending shot past goalkeeper Joel Robles.

Senegalese defender Koulibaly sat out the first of a two-match ban as Napoli beat Brescia 2-1. Koulibaly was punished for seeing red and insulting the referee in a midweek league defeat to Cagliari. Koulibaly was also fined 10,000 euros ($11,000) for the incident.

Ghanaian midfielder Boateng, 32, came on for the last 10 minutes to a warm reception from the fans at his former club AC Milan. Boateng had two stints at Milan, helping the team to their last Serie A title in 2011. Boateng replaced Federico Chiesa as Fiorentina ran out 3-1 winners. Ivorian midfielder Kessie, 22, struggled to make an impact at the San Siro with the hosts falling to their third consecutive defeat. 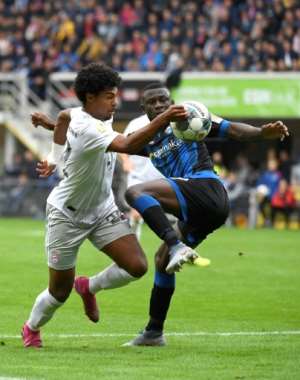 The left-back may not have scored for 24 months, but broke his drought spectacularly with a wonder-strike against Bundesliga champions Bayern Munich. While his side suffered a 3-2 defeat, Collins gave Bayern goalkeeper Manuel Neuer no chance with a long-range strike in the second half which is sure to be a contender for goal of the season.

Harit was at the heart of everything Schalke did as they pulled off a surprise 3-1 victory over high-riding RB Leipzig. The young Moroccan pulled the strings for the visitors, scoring a goal and chalking up an assist to continue his strong recent form.

Another Nigerian, Union Berlin's Ujah, also got on the scoresheet in matchday six. He guided the ball home expertly in the 86th minute to make the score 2-1 and give Union hope of a late home draw, but it was not to be for the men from the German capital.

Angers have been one of the biggest surprises in European football this season and they continue to hold on to Ligue 1 leaders Paris Saint-Germain's coat tails thanks in part thanks to Morocco striker Alioui. Angers may have only drawn 1-1 at home with lowly Amiens but the 27-year-old continued his fine start to the season with his fourth goal in eight matches to save a point for the unlikely high-flyers, who stay second.

Just 16 years old, Angolan Camavinga continues to look wise beyond his years in the Rennes midfield. He put in another impressive performance as his side came within a double save of snatching all three points at Marseille. French broadcaster Canal+ named Camavinga man of the match after the 1-1 draw and any more confident displays like this one and bigger clubs will come looking for the young talent.