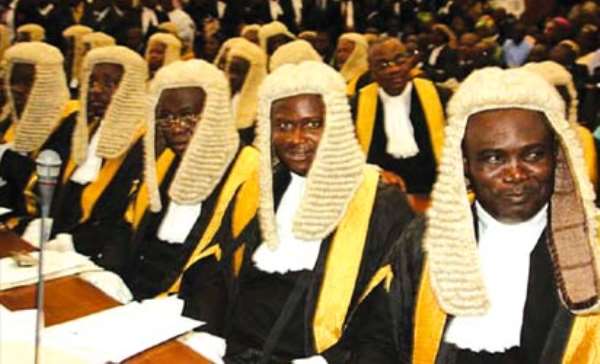 The Judiciary is the third arm or organ of government. It has the responsibility for the oversight of interpreting the laws of the land; guaranteeing justice for all and prescribing punishment for those breaching the laws and appeasing those offended through the award of compensations and declarations of favourable verdicts, to them. The Judiciary by its independence from the other two organs of government, thus the Executive and the Legislature, by virtue of the democracy principle of separation of powers, plays the role of checks and balances on the Executive and the Legislature branches of government.

Therefore, while the Legislature makes the laws, and the Executive implements them, the Judiciary ensures that the laws so implemented are not abused but abided by the public and everyone in, or coming into, the country. The Executive and the Legislature are inclusive. Subsequently, for lawfulness but not lawlessness, to prevail in the country, the Judiciary has an effective role to play.

As lawlessness culminates in many evil practices and criminalities, the Judiciary by law is obliged to ensure that such developments never occur in the first place or are curtailed when they do occur. They can only do this by being fair and firm in the dispensation of justice without which all their efforts will be much ado about nothing, thus, more haste, less speed.

Why are corruption and many other forms of malpractices, e.g. armed robberies, thefts, blatant propensity by police officers on Ghana roads to collect bribes from motorists without fear or shame, kidnappings and all sorts of crimes going on and ramifying in Ghana? It is because of the Judiciary not upholding the ethics of their profession. They are not dispensing justice as they should. Some of the judges and lawyers are corrupt themselves. They take all sorts of bribes to twist justice in favour of the highest bidder. This is an indisputable fact! At least, the supposedly Ghanaian award-winning ace investigative journalist, Anas Aremeyaw Anas, has proved it in his exposé on "judicial corruption in Ghana". Again, it has been proved by one Madam Akua Berhene from Kumawu-Bodomase. She claims to have offered bribe to the Kumawu Circuit or District Court Judge somewhere in May or June 2019. Listen to the secretly captured conversational audio tape below.

The judges in tacit agreement with the lawyers, do unnecessarily continuously postpone cases for weeks, months and years, all with intent to exact bribes from the litigants to finally end up in deciding cases in favour of the highest bidder but not the genuinely innocent party in the litigation. They also at times, if not very often, consider the status of a litigant but not the merits of the facts and evidence submitted to the court, in deciding cases. This is an undeniable fact!

Should such be the behaviour of the Judiciary, why will some hardened criminals with wherewithal to pay their way through not be empowered to continually commit crimes with impunity? Why will the law enforcement agents, for example the police, not have the palatable taste for taking bribes or engage in criminal activities themselves as some instances of police involvement in crime committals do attest to the fact?

How come that if someone steals a goat, a basketful of farm produce, e.g., cassava, plantain, cocoyam, the person is sentenced to many years in prison? However, if a government appointee, a politician or a civil service personnel embezzles millions of Cedis, they are left free to walk about the streets of the country? A classical case is that of the notorious swindler in Ghana, Mr Alfred Agbesi Woyome. He does not even respect a verdict declared by the Ghana Supreme Court. What is going on in my beloved country Ghana?

Do the judges not know that justice delayed is justice denied? Why then are they so much into always delaying cases through sorry to say, stupid delays? The Judiciary is so rotten that even court registrars, court clerks and court bailiffs have the power to decide who wins their case through the intentional disappearance of vital documents from court files or dockets or arranging bribes for the judges as it happened in the Kumawu Circuit or District Court case.

What assurances are the judges and all those in the judicial system going to give to Ghanaians and me in particular, that from today forward, they will live by the ethics of the law profession to ensure that justice is decided creditably but not influenced by bribe?

By the publication of this article, would the General Legal Council please investigate the judge, whoever he is or was, at the Kumawu Circuit/District Court, as at June 2019, for corruption, if the audio evidence is credible, permissible and acceptable to Ghana courts? The judge did exactly as wished, or requested of him, by, the woman hence the bribe did influence him. I will not hesitate to lodge a formal complaint against him if the request hereby made is not the appropriate method to adopt to get him investigated.

For Ghanaians and foreign investors to be proud of Ghana as a peaceful country to live and do business, the ongoing acts of insecurity must stop or be reduced. They can only be stopped or reduced only if the Judiciary would cease taking bribes to twist justice but would rather decide cases on the merit of the facts and evidence submitted to them. Until they stop their unprofessional behaviour to bring peace and justice into the country, I will ensure they never enjoy sound sleep. I shall be on their back writing about them at any least opportunity I get.

Why is Samuel Ofosu-Ampofo, the Chairman of NDC, a criminal by the evidence of the recorded audio tape on his hatched plots against Ghana and Ghanaians, still walking a free man without the courts hurrying to hear and rule on his case? What is going on in Ghana, oh the Judiciary? Is that how best you can contribute towards building Ghana or fighting the devastating official corruption ongoing in Ghana?

The author has 2120 publications published on Modern Ghana.