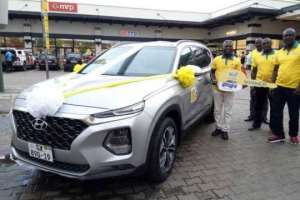 He took home a Hyundai Santa Fe 2019 edition after emerging the customer with the highest number of points in using MoMo for transactions.

Speaking to the media on the sidelines of the event, Mr Quayson, a fish distributor, expressed excitement for emerging the winner.

Mr Eli Hini, the General Manager, Mobile Financial Services of MTN Ghana, said the company took delight in changing and improving lives of the people adding that their utmost aim was to provide an excellent customer service through innovation, hence the [email protected] promo.

He said the MoMo was safe and customers should not discuss their account, disclose their wallet pin, or give their phones to anyone to undertake transactions on their behalf saying their pin was their secret.

Touching on recent rumours that emerged of a possible collapse of the MTN MoMo Service, which subsequently led to panic withdrawals by some customers, Mr Hini said MTN MoMo was safe and that the Network was working with security agencies to arrest the perpetrators involved in the audio recording and circulation.

Alhaji Majeed Rufai, Senior Manager, Commercials, MTN Ghana, congratulated current and past winners of the promo and advised customers to be cautious of calls that claim they had won prizes and should send some money before claiming their prizes.

"MTN will call you with its own number, thus, 0244300000, also bear in mind that MTN won't extract money from anyone before they are awarded with their prizes, so beware," he noted.

Mr Rufai, however, urged customers to send a text message to a Toll Free number 1515 to report anyone who tried to defraud them.

Cash prizes ranging from Gh¢500.00 to Gh¢3000.00 and Samsung flat screen television sets from 49 to 65 inches were presented to the other winners.

Presentations are still underway in the regions as four remaining cars are still up for grabs.