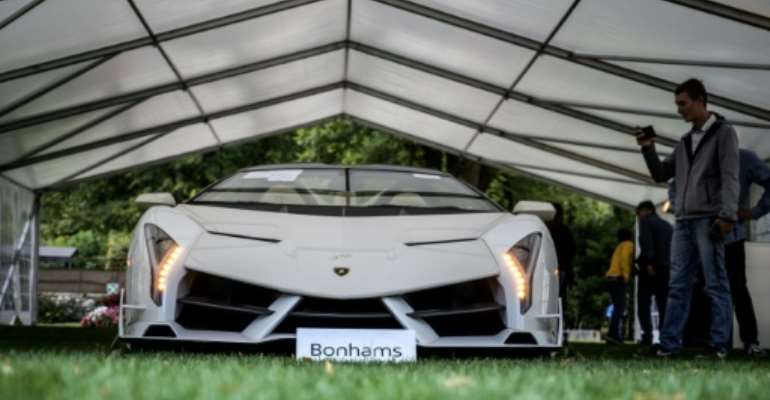 This Lamborghini Veneno Roadster one of only nine in the world, fetched a world record 7.6 million euros. By FABRICE COFFRINI (AFP)

The money made from the Geneva auction will go to charities helping the poorest people in the tiny West African country, which is one of the continent's top oil producers.

"It was a very successful sale," Lynnie Farrant, spokeswoman for British auctioneers Bonhams, told AFP. The auction house had estimated that the collection would fetch 17 million euros.

The higher than expected total came despite the fact that the cars were sold off individually with no reserve price -- a minimum price below which no sale takes place.

The collection sold off included Ferraris, Lamborghinis, Bentleys, a Maserati and a McLaren among others.

A single private collector bidding by proxy bought a significant number of the cars, said Bonhams.

This bidder paid a world-record price for a very rare white Lamborghini Veneno Roadster, winning a battle with rival bidders to get it for 7.6 million euros. There are only nine copies of the car in the world.

Swiss prosecutors had the cars seized in 2016 when they opened a corruption investigation against Obiang, the likely heir of President Teodoro Obiang Nguema, who has ruled for 40 years. 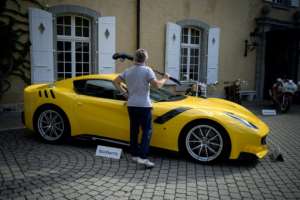 This 2015 Ferrari F12tdf Berlinetta was among those auctioned off Sunday, fetching 794,000 euros. By FABRICE COFFRINI (AFP)

Anti-corruption groups have long accused him of embezzling his country's funds to finance his playboy lifestyle.

Under the Swiss penal code, prosecutors can choose to drop charges in this category if defendants offer compensation "and restore a situation that is in conformity with the law".

In a deal with Obiang, the authorities ended their investigation in February but kept the supercars and received 1.4 million euros to cover the costs of the case.

Under the terms of that agreement, Switzerland's foreign ministry will oversee how the money from the auction is spent in Equatorial Guinea.

Obiang was also investigated and prosecuted in France, and in October 2017 a Paris court handed him a three-year suspended jail term for embezzling state funds to buy assets there.

He was also given a suspended fine of 30 million euros.

Obiang, who is himself vice president for defence and security in the country his father rules, did not attend the trial and has appealed his conviction.

In that case too, French officials confiscated supercars belonging to Obiang among other assets. 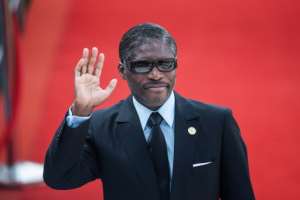 In September 2018, Brazilian media reported that police and customs officers seized more than $16 million in cash and luxury watches from a delegation accompanying Obiang on a private visit.

Despite his problems with the courts, Obiang appears to be on a fast track to succeed his father.

In October last year, he was promoted from colonel directly to division general, without passing through the normal intermediary rank of brigade general.

The following month, he presided over a cabinet meeting for the first time.

Equatorial Guinea, Africa's only Spanish-speaking nation, is the continent's third-biggest oil producer but more than half of its population live below the poverty line.

It is regularly criticised by human rights groups, not just for its corruption but for its repressive laws, and is accused of carrying out unlawful killings and the torture of opposition figures.