Thousands pay homage to Chirac some call the 'symbol of France' 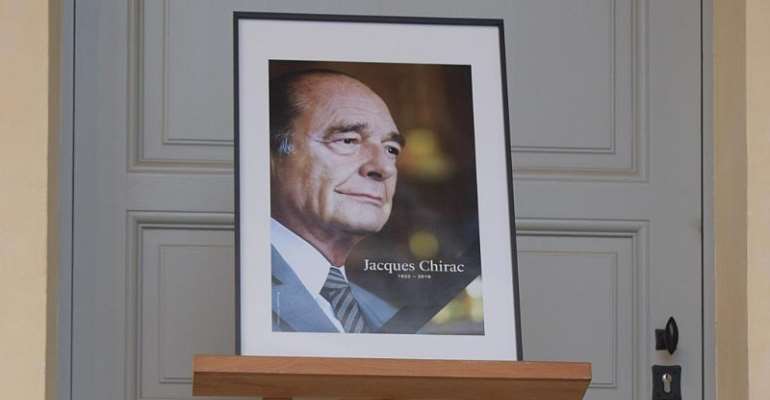 Despite the rain, the cold and the grey skies, people of all ages lined up, some as early as 7:00 am to pay their respects to the passing of former President Jacques Chirac whose coffin was placed at the entrance of the Cathedral Saint-Louis-des-Invalides in Paris. At 86 years of age, his death was confirmed earlier this week on 26 September.

The former mayor of Paris and president of France from 1995 to 2007 was honoured through a public memorial ceremony on Sunday, to be followed by a private mass on Monday along with a minute of silence at all public institutions and football matches.

With a line snaking its way around the main street in front of Les Invalides and into the nearby neighbourhood, hundreds came out to pay their homage to Chirac at a public ceremony.

A mix of ages and backgrounds braved the grim autumn weather to have their final moment with the president, who many remember for his contribution to culture in France along with his willingness to stand up to certain world powers.

Positive points outweigh the negative ones
While many haven't forgotten his stained reputation after being found guilty of influence peddling, breach of trust and embezzlement while mayor of Paris, others are keen to move beyond that moment.

“Who are we to condemn or judge others?” says 59 year old Sarah, originally from Cameroon who arrived two hours before the ceremony was due to begin.

“I've loved Mr. Chirac for 43 years now after I read about him in a newspaper back in my country Cameroon when I was young, and I fell for his charm. And when I arrived in France about 20 years ago, I saw everything he had done, all he had done for the country” explains Sarah.

“We can try to forgive, as we have all done things that need forgiving. So I'd rather keep the good memories, the good moments, the things he accomplished…such as refusing war in Iraq” she adds.

Just ahead of the queue from Sarah is a group of three friends, all 22 years old. They arrived three hours before the ceremony to make sure they were able to get in.

Despite their young age, they too remember his willingness to stand-up to global pressure.

“For me he's the only president, along with De Gaulle, who defends France and its values and incarnates that symbol; a bit like royalty,” says Dylan.

“He's the only one who made important decisions, such as the war in Iraq. Today, none of our presidents would dare to say no and confront the United States and the European Union!” he adds.

When asked about the convictions against Chirac, he is also quick to defend the former president.

“I don't think we can judge a person based on a few actions during his life. It's the whole ensemble really, and that's what we remember about him, not his faults, of which we all have.”

Image of the French republic
“We loved very much this president and the image he gave France….I believe he was a real character, lots of charisma, and a representative of France” says 51 year old Nathalie Guillaume who brought was visiting from the southern town of Dax in France.

Just a year younger than Chirac, Monique Roussel says she wanted to attend the ceremony despite “having a fractured back; I'm wearing a brace” she points out with a smile.

“Ok, I didn't like it when he agreed to a cohabitation, but the best thing he did was not get into a war with Iraq, that's the most important thing for France. It's magnificent!” she exclaims, adding having the opportunity to attend Sunday's memorial ceremony “is a real gift.”

Having just paid her respects to Chirac, 71 year old Elizabeth Cooper walks down the formal stone corridor in the inner court just outside the chapel of Les Invalides.

A concert pianist and conductor, she remembers fondly the moment she first met Chirac.

“I had the opportunity to be received by Chriac for a lunch while he was mayor of Paris. He was a magnificent man, a real humanist with a sense of humour,” explains Cooper with an intensity in her voice.

“We are very, very, very touched by the passing of Chirac, but we will keep the memories of a man who loved his country, who loved life and who adored everyone.”