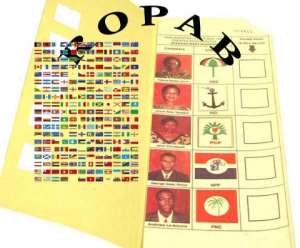 ... Ghanaians Abroad now have the right to vote abroad Accra, Feb. 27, GNA - President John Agyekum Kufuor has signed into law the Representation of the People Amendment Act (ROPAA), his Press Secretary told the Press at a Castle briefing on Monday. Mr Kwabena Agyepong said the President gave his assent on Friday, a day after its passage by Parliament. He stated that the law was not to the advantage of any political group and asked for total support and co-operation of all Ghanaians to ensure its smooth implementation. The passage of the Bill was characterised by deep division between the Minority and Majority in Parliament. The Minority has boycotted the House over the issue while two demonstrations were held by an anti-Representation of the People (Amendment) Bill group called Concerned Ghanaians. After the passage of the Bill last Thursday, there were calls on the President not to give his assent. Turning to other issues, Mr Agyepong expressed President Kufuor's delight at the elevation of Archbishop Peter Poreku Dery to the status of Cardinal. "It is not only memorable that he is among 15 prelates to have been elevated by Pope Benedict XVI, but this is also a mark of Ghana's growing prominence internationally," he said. "President Kufuor therefore joins the entire nation and the Catholic faithful to share in the joy of his elevation," he said. Archbishop Dery, 88, is the second Ghanaian to become a Cardinal after His Eminence Peter Cardinal Kwadwo Appiah Turkson. He will be consecrated on March 24 in the Vatican to be followed by the investiture ceremony. Mr Agyepong also spoke on a number of issues ranging from the economy to the 49th Independence Celebration and said the recent credit rating of Ghana, her ranking as an attractive place for doing business and re-enlistment on the Exim Bank of America were positive pointers that had emboldened and refreshed President Kufuor to vigorously pursue the economic targets set in this year's budget. On the upcoming Independence celebration, Mr Agyepong said it was the wish of President Kufuor that Ghanaians would use the occasion to rededicate themselves to the ideals of the founding fathers. Government on its part would continue to pursue pro-poor policies to improve the lives of all, he said.