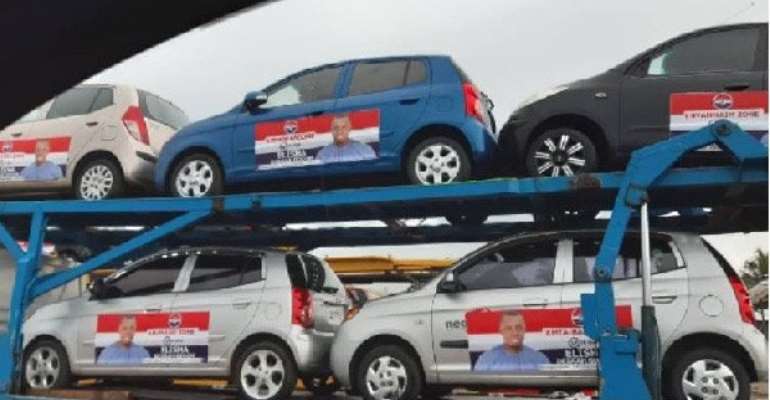 There was drama as Ajumako Enyam Essiam as the New Patriotic Party (NPP)’s parliamentary aspirant took away the vehicles he has brought to the election grounds after he lost.

Elisha Debrah Odoom had brought 11 saloon cars to the election grounds to donate to the party took on Saturday as part of his contribution to getting the party re-elected in 2020.

The aspiring parliamentary candidate in one of the 100 orphaned NPP constituencies promised to donate each of the branded cars to the 10 Zones in the constituency.

The remaining one, according to Accra-based Kasapa FM, is to the constituency office to ensure the effective running of party activities.

However, this was not to be as Mr Debrah Odoom who was so sure of representing the governing NPP lost to Rashid Kwesi Etuaful.

When the votes were counted, he polled 67 votes as against his closest contender who secured 411 votes.

Obviously angry and disappointed Mr Debrah Odoom after the election quickly asked that all the cars be loaded on a trailer and driven to his residence much to the surprise of the delegates.

The delegates were shocked when the defeated candidate ordered that the 11 cars be sent back to wherever he brought them from.

The delegates were disappointed that he did not even donate one to the party office to show his love for the party.