Count Me Out, Mr. Rawlings 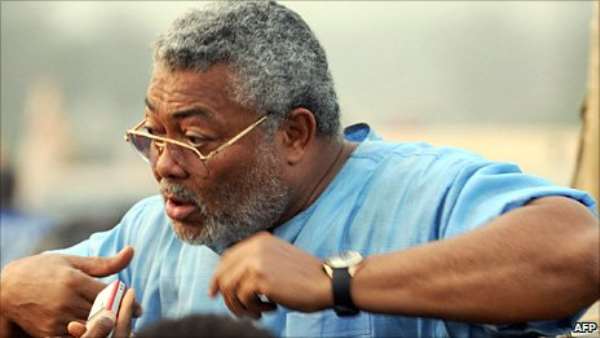 It was well in keeping with protocol for President Addo Dankwa Akufo-Addo to have selected former President Jerry John Rawlings as head of the delegation to the funeral of the late President Robert Gabriel Mugabe, although were I in the shoes of Nana Akufo-Addo, I would rather have had Ghana’s Chief Diplomat in Harare or High Commissioner represent the country at the funeral of the self-disgraced autocratic leader (See “Mugabe Was a Fearless Fighter, Ghanaians Are Saddened by His Death – Rawlings” Modernghana.com 9/15/19). As a domestic public relations gesture, selecting Mr. Rawlings as head of Ghana’s delegation to the Mugabe funeral was all well and good. In of itself, it was all well and good as well, if also because falsely or truthfully, the former Ghana Airforce’s Flight-Lieutenant has tended to envisage himself as kindred souls with Mr. Mugabe, who was more of an avuncular figure to the longest-reigning Ghanaian strongman than the deceased leader’s peer or coequal.

I am not saddened by the passing of the widower of Mrs. Sally Francesca Hayfron Mugabe because nauseatingly like most of the dictators on the African continent, the first postcolonial Zimbabwean leader had shamefully overstayed his political welcome and usefulness and had to be literally pushed off the scene; he also brought unbearable hardships upon the heads of the very people whose liberation from British-settler imperialism he, at least for quite a while, authentically and even legitimately claimed to both represent and epitomize, of course, alongside such equally heroic and formidable freedom fighters as Mr. Joshua Nkomo and others. In the end, however, contrary to what Mr. Rawlings had to say about the man at Mr. Mugabe’s funeral, the Zimbabwean leader almost completely lost his hitherto “impressive moral compass.”

I also sincerely believe that former President Rawlings’ tribute to the 95-year-old Zimbabwean leader was more about the tribute-payer himself than it was about the deceased man. The Akan have a saying that: “We attend other people’s funerals in order to mourn our own dead relatives.” In this stance, Mr. Rawlings was clearly mourning his own inevitable demise or passing rather than the passing of any of his own relatives or kinsfolk. For, it goes without saying that the leader of the erstwhile Armed Forces Revolutionary Council (AFRC) and the Provisional National Defense Council (PNDC) has wreaked far more havoc upon the pates of Ghanaian citizens than he brought any materially redeeming resources to the Ghanaian people or citizenry. Indeed, like Mr. Mugabe and his Second Wife, Mrs. Grace Mugabe, Mr. Rawlings continues to live comfortably well among the pack of the lumpen poor Ghanaians whom he smugly claims to have sacrificed and dedicated his life towards the significant improvement in their quality of life.

Both leaders also made the patently depraved art of kleptocracy, Woyome style, the norm, rather than the anomaly, in the latter stages of their reigns. As Africans, if we are to significantly advance the material development and comfort of our people, the first step must be laying bare and unvarnished the truth about the seamy underbellies of the overwhelming majority of our leaders. It is, indeed, true that like all of his contemporaries and peers, Mr. Mugabe had his great moments as the fearless fire-spitting champion of the cause of the liberation of his people from Euro-colonial racist imperialism.

But it is equally true that as a leader past the first glorious decade of his rule, Mr. Mugabe literally became an albatross around the necks of his people who tragically came to eventually rue the day that their leader led them into African self-rule. You see, past 10 years of his political domination of the former Rhodesia, Mr. Mugabe fast descended into the cannibalistic monstrosity of overstayed leadership, which often turns gross and invariably upsetting to the stomach, for by then what first began as a benevolent and even altruistic leadership would by now have predictably become an extortionate private corporatist enterprise.

The Nation-State of Zimbabwe had become virtually synonymous with the private estate of the Mugabe Clan. It therefore came as absolutely no surprise, whatsoever, that the old “democratic dictator” wanted to bequeath the nation as a personal gift to his second wife, Mrs. Grace Mugabe.

The author has 5506 publications published on Modern Ghana.