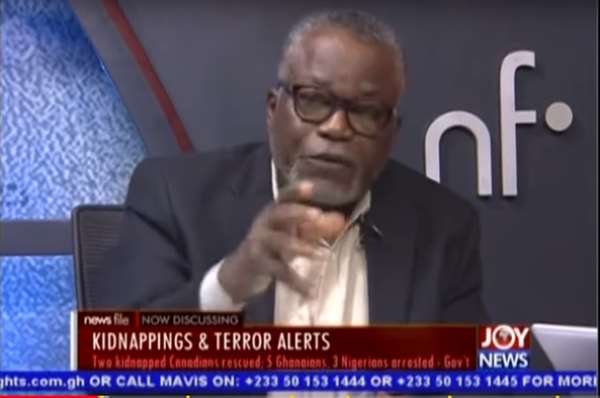 When I heard Col. Festus Aboagye, the retired Ghana Army Officer, cavalierly presume to second-guess the operatives of the country’s Military Intelligence System, I was beside myself with amused contempt. It was very obvious that impressive military credentials and all, Col. Aboagye clearly did not know what he was talking about when the self-styled intelligence expert suggested that the recently arrested alleged coup-plotters ought to have been allowed to be in the direct process of overthrowing the Akufo-Addo-led government of the New Patriotic Party (NPP) before moving in to promptly quash the same.

I was wracked with amused contempt because the Information Minister, Mr. Kojo Oppong-Nkrumah, has publicly noted that the Mac-Palmer Gang, I hope I have the name of the lead coup-plotter right, had been studiously followed around the clock for some 15 months prior to the decision by the key operatives of our national intelligence apparatus to move in and have the criminal suspects arrested and rigorously prosecuted.

We are also told that the decision to arrest the three criminal suspects, as well as their collaborators among the ranks of the Ghana Armed Forces (GAF), comes in the immediate wake of the shooting practice or the testing of the weapons earmarked for use in the takeover attempt. And, of course, this is where the expertise of real soldiers and military coup-plotting and intelligence experts like Capt. Joel Sowu comes into play. In the wake of the arrests of the alleged co-conspirators in the plot to oust the democratically elected Akufo-Addo government, much of the nationwide conversation on this issue has almost exclusively focused on whether the sort of relatively flimsy weaponry seized from the alleged coup-plotters were really capable of enabling the alleged coup-plotters to successfully carry out their agenda.

Capt. Sowu tells us that, indeed, they could. He, however, quickly and expertly predicates his assertion on the fact that the staging of any successful coup and/or the successful foiling of one is far more dependent on strategy and planning than the sheer quality of the weaponry earmarked for such operations (See “Don’t Rubbish Military Intelligence on Coup Attempt – Former Coup Plotter Advises” Ghanaweb.com 9/26/19). Capt. Sowu must know what he is talking about, having personally participated in at least four major coup plots for one of which he was promptly arrested and sentenced, together with several others, to death by firing squad. The old hardnosed soldier was, however, darn lucky enough to have spent only three years immured at the Nsawam Medium-Security Prison. The latter abortive coup, we are told, was staged against the Ignatius Kutu Acheampong-led junta of the so-called National Redemption Council (NRC).

But, of course, what is instructively significant to observe here is Capt. Sowu’s claim that at the time of their arrest for the 1975 abortive coup, the only weapon found on him and his co-plotters was a “Kafugbeng” or a pump-action gun of the kind used for game hunting and a few rounds of cartridges. He also says that prior to their arrests, the coup-plotters had been surveilled by military intelligence operatives for at least 8 months. He also affirms the unimpeachable expertise of the nation’s military intelligence operatives by rising up from his chair and bowing reverentially in celebration of the expertise of our national intelligence operatives, as he did recently in a television studio. This is precisely the sort of expert knowledge that Col. Aboagye Clearly and scandalously appears to have sorely missed at the Ghana Armed Forces Senior Staff College during the course of his training.

Indeed, throughout the largely rash national discourse on the latest coup attempt, the one saliently embarrassing trait that has uncomfortably, albeit understandably, come to the fore is this nauseatingly pathological superficiality of most of the critics. Except for Capt. Sowu and one or two national security experts, nearly every critic has been obsessively focused on the nature and quality of munitions seized from the suspects, well ignoring the fact that the real target of these would-be nation-wreckers was unmistakably President Addo Dankwa Akufo-Addo. In other words, the arrested coup-plotters seem to have been more studiously focused on assassinating Nana Akufo-Addo than illegitimately assuming the reins of governance.

Which clearly brings up the possibility of the Mac-Palmer Gang’s having been hired by some inveterate political opponents of Nana Akufo-Addo who may very well be seeing absolutely no other alternative of democratically unseating the former Attorney-General and Minister of Justice short of savagely liquidating unarguably the most progressive and visionary leader of Ghana’s Fourth Republic.