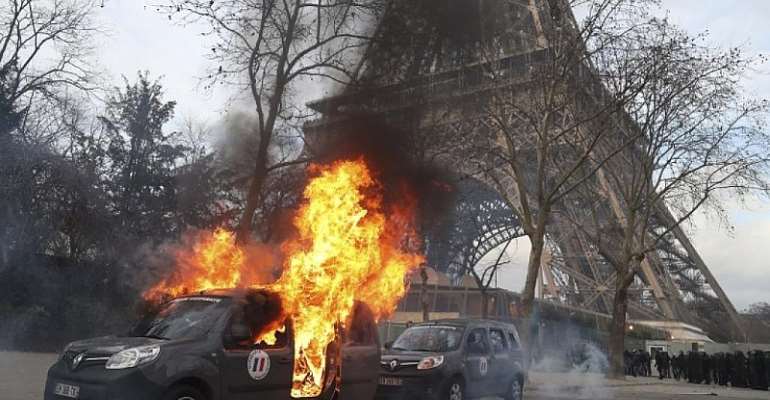 A radical left activist arrested in February during Act 13 of the Yellow Vests protests for violence and setting cars on fire, including the Porsche of the chef Christian Etchebest in Paris, has been released after seven months of detention, according to reports.

Thomas P. was arrested on Saturday, February 9 after four hours of protests in Paris. He is also suspected of having burned a Sentinel anti-terrorist vehicle and of taking part in the attack on a prison van near the Champs-Elysées.

He was jailed under a criminal arrest warrant February 12th following his indictment for aggravated "property damage" and "violence against persons with public authority".

Originally from the Bordeaux region, the 26- year-old man was then listed S (State Security) for his membership of "the anarcho-libertarian movement", according to the Minister of the Interior Christophe Castaner

In a letter to the media in May from his prison in Fleury-Mérogis, Thomas P. had taken responsibility for some of the actions, including the burning of the car of the media chef, claiming of "fair use of violence" "in response to the legal violence” of the police.

"Like all those who were demonstrating this February 9th, I learned that once again a man had just had his hand torn off by a grenade, and then I did not see anything because of the gas. We decided to stop being victims and to fight. I'm proud of it, proud to have raised my head, proud of not giving in to fear,” he wrote.

After more than seven months in detention, the investigating judges allowed for his release on September 20, according to a judicial source and his lawyers. He was actually released Tuesday and is now under judicial supervision, after the rejection of two prosecutorial appeals, they said.

In Act 13 at the beginning of February, street furniture and cash machines were vandalized during the marches and a dozen cars burned, mainly luxury cars. In front of the National Assembly, a protester in his thirties had his hand torn off after trying to seize a grenade from the ground.