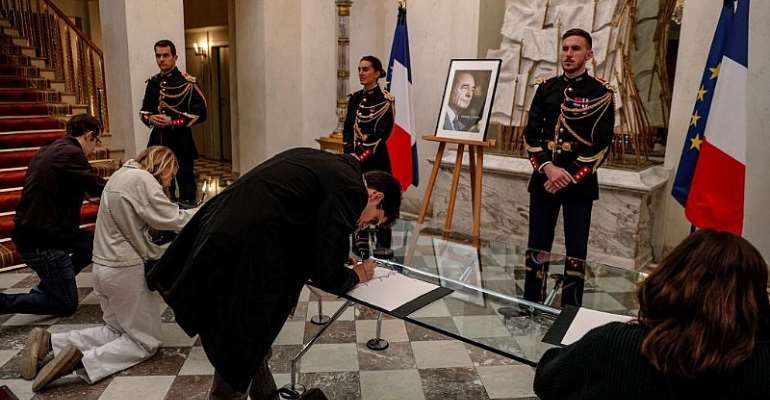 Mourners gathered at the Elysee Palace in Paris on Friday to pay their respects to former president Jacques Chirac, who died on Thursday aged 86.

Ahead of a national day of mourning announced for Monday, the French presidency threw open the doors of the Elysee Palace for people wanting to sign books of condolences.

"I express my admiration and tenderness for the last of the great presidents," read one tribute. "Thank you for fighting, thank you for this freedom and good spirits."

In a televised address Thursday night, President Emmanuel Macron praised "a man whom we loved as much as he loved us".

Chirac is also to be given the honour of a public memorial ceremony on Sunday as well as a mass on Monday, which will be attended by Macron and foreign dignitaries including German President Frank-Walter Steinmeier and EU Commission president Jean-Claude Juncker.

A minute of silence will also be observed Monday at public institutions, schools and football matches.

Schools have also been urged to dedicate class time on Monday "to evoke the former head of state's memory," with the education ministry saying it will propose potential discussion themes for teachers.

And the Quai Branly museum of indigenous art founded by Chirac, who had a deep appreciation of Asian cultures, said it would offer free admission until 11 October.

French newspapers splashed his portrait across their front pages and dedicated most of their editions to the former president's life -- French daily newspaperLe Parisien had an exhaustive 35 pages plus a 12-page special insert.

Jacques Chirac will be buried at the Montparnasse cemetery in Paris next to his daughter Laurence, who died in 2016 after a lifelong battle with anorexia.