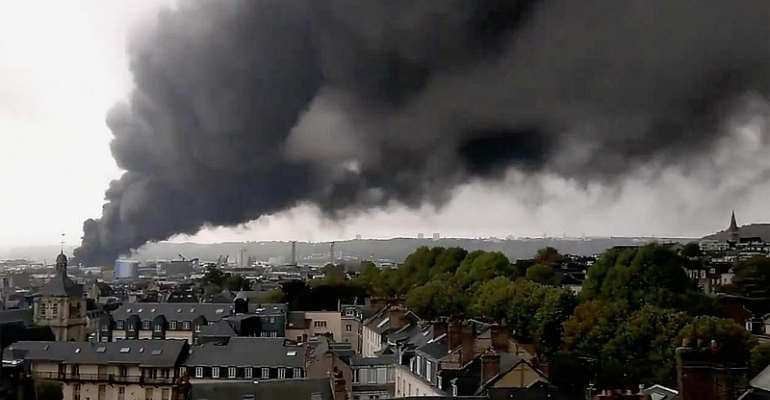 France's health minister on Friday said she could not guarantee there was no risk to the public after a massive fire ravaged a chemicals factory in the city of Rouen in Normandy.

Schools in the city were shuttered for a second day following the huge blaze which erupted on Thursday in a storage facility owned by Lubrizol, a manufacturer of industrial lubricants and fuel additives owned by the billionaire American investor Warren Buffett.

"The city is clearly polluted," minister Agnes Buzyn said after visiting the scene, adding: "I cannot guarantee that there is no danger. There are of course traces of hydrocarbons."

Earlier Pierre-Andre Durand, head of the Seine-Maritime department in Normandy, tried to reassure residents despite the strong smell of hydrocarbons hanging over the city, famed for its cathedral.

"We have no more concerns about the fire," he said, as firefighters worked to mop up the residues deposited by the oily, black plume that darkened Rouen and surrounding areas for most of Thursday.

"To the people of Rouen I say: We can live and work absolutely normally," Durand said, adding that tests had found no harmful toxins in the air or city water.

Schools were closed, he said, for thorough cleanups of the black soot that had descended on the playgrounds and courtyards.

As an extra precaution, Durand suggested that older people who may be more susceptible to breathing difficulties "may want to avoid going outside".

Many people could be seen wearing face masks Friday, and France 3 television said it had evacuated its Rouen studios and offices after some employees suffered nausea and vomiting.

'Unpleasant odour'
As for the Seine river that flows through Rouen, a key water resource for France, Durand said there had been some pollution from the blaze, but insisted it had been contained with floating barriers.

"The situation does not warrant any concern. And remember that fishing is prohibited in the Seine in the Seine-Maritime department," the official said.

The Seine, one of France's biggest rivers, flows through Paris to the south and empties into the English Channel further north in Le Havre, which is home to a major fishing fleet.

Prosecutors have opened an inquiry into the cause of the incident, which woke residents with a booming explosion in the early hours of Thursday.

The Lubrizol plant sits just a few kilometres from the centre of Rouen, a city of some 100,000 people. The smoke spread 22 kilometres.

"I am very surprised to see a fire which broke out in the middle of the night, in a spot where there was no one. I am investigating," he said.

Not the first accident
Lubrizol said the fire damaged a storage facility, a drumming warehouse and an administrative building.

It is the third serious accident in seven years at the site.

In January 2013, the factory had a giant leak of the gas mercaptan, which smells like cabbage or rotten eggs and is often added to natural gas to alert people in case of leaks.

A cloud of the gas from that leak blew all the way to Paris and across the Channel into southern England, where residents complained about the odour.

And in 2015, 2,000 litres of mineral oil used in lubricants leaked from the Lubrizol site into the local sewer system.