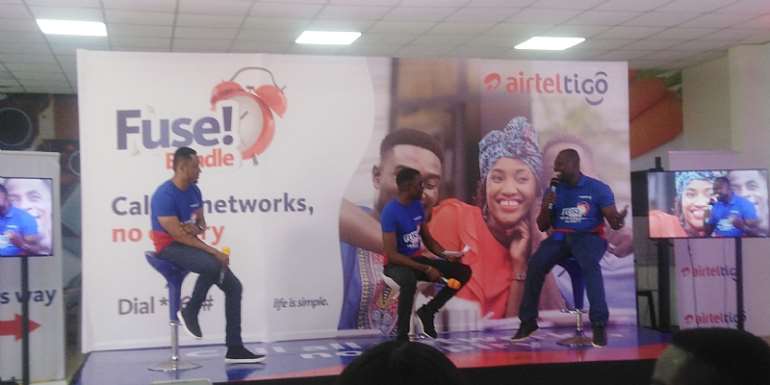 Telecommunication Giant, AirtelTigo has unveiled an official 'Fuse Bundle Song' which will accompany the already existing voice and data package.

According to Management, the move will further connect customers to both functional and emotional traits of the AirtelTigo brand.

Interacting with Journalists at the unveiling ceremony, Chief Financial Officer, Prince Acheampong said: "Our brand promises to make life simple for customers and the Fuse Bundle which does not expire is another example of our commitment to our users".

He further explained that due to the unique artistry nature of Global Afrobeat, Fuse ODG was tasked to compose a song.

"We are excited about the collaboration with Fuse ODG. His unique artistry which embodies the Spirit of Ghana resonates with our brand," the Chief Financial Officer explained.

However, Ghana's Superstar and Global Afrobeat singer, Fuse ODG commended the Management of AirtelTigo adding that he is elated to be part of the campaign.

Fuse ODG however emphasised that AirtelTigo is the first Ghanaian Telecommunications he has partnered with.

Six months ago, AirtelTigo introduced a 'Fuse Bundle' to be used for calls to all networks and surf the net without expiring. Management says it however engaged users demanding feedbacks of the product of which a song has been composed.

The official 'Fuse Bundle Song' was however welcomed by a dance from Dancegod Lloyd at the unveiling ceremony.

Management of AirtelTigo says it will be engaging customers with series on the new 'Fuse Bundle Song' in the coming days.