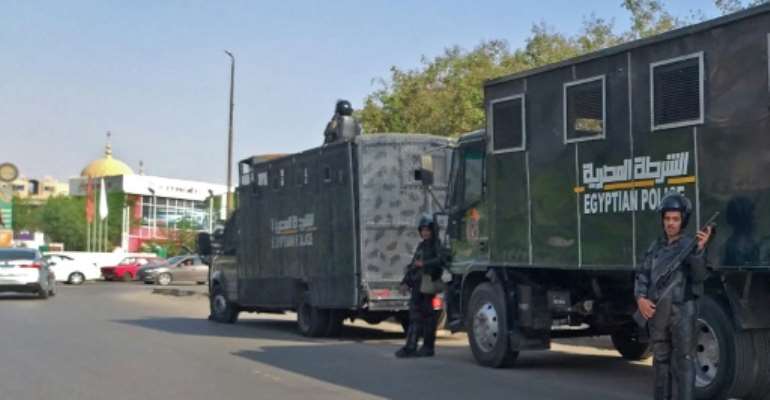 Egyptian riot police stand guard in Cairo to prevent any protests, amid an intensifying crackdown against dissent. By Khaled DESOUKI (AFP)

Scattered protests broke out Friday in Egyptian cities against President Abdel Fattah al-Sisi as his supporters also took to the streets in counter demonstrations a week after rare anti-Sisi rallies shook the country.

Police blocked streets leading to Cairo's iconic Tahrir Square, the epicentre of the 2011 revolution that ousted longtime-autocrat Hosni Mubarak, after calls by exiled businessman Mohamed Aly for a "million-man march".

Construction magnate Aly's viral videos accusing Sisi and the military of corruption sparked shock protests against the president last weekend, with hundreds taking to streets across the country calling for Sisi's ouster.

But the security forces have since moved swiftly to snuff out further protests, arresting nearly 2,000 people in seven days, rights groups said.

Elected president in 2014, a year after pushing predecessor Mohamed Morsi and his Muslim Brotherhood from power, Sisi is seen by many as one of the most authoritarian figures in the Middle East.

And after arriving home from the UN General Assembly in New York, Sisi Friday insisted there was no cause for alarm.

"There are no reasons for concern. Egypt is a strong country thanks to Egyptians," he told reporters.

Despite the heavy security presence in the capital on Friday, hundreds took to the streets in Cairo's Warraq island district, a witness told AFP 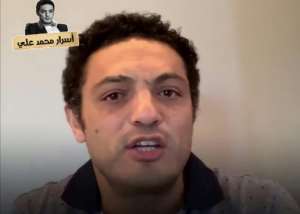 "About 3,000 people demonstrated after Friday prayers," he said, adding police used tear gas to break up the crowds.

In southern Egypt, small-scale protests were staged in Qus and Qena city, other witnesses said.

"A hundred people went out in Qus and tore down banners bearing photos of Sisi," one said, before security forces "took control of the situation".

Entrances were closed off to Tahrir Square, where surrounding cafes have been shuttered for the past week. Nearby streets were deserted except for police officers frisking passersby.

In Cairo's Nasr City about 1,000 people turned out Friday afternoon in support of Sisi, according to an AFP journalist.

Men and women waving Egyptian flags and photos of Sisi streamed through an area near the tomb of former president Anwar Sadat.

Apart from beefing up their presence on the streets, the security forces have also detained people they suspect of being key influencers of unrest -- journalists, human rights activists and lawyers. 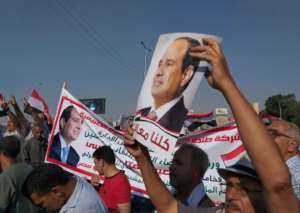 More than 2,000 people have been detained since last weekend's protests, according to the UN quoting civil society groups, in what could be the biggest crackdown since 2013.

"Under international law people have a right to protest peacefully," Bachelet said in a statement.

"They also have a right to express their opinions, including on social media. They should never be detained, let alone charged with serious offences, simply for exercising those rights."

The attorney general's office said "not more than 1,000 protesters" had been questioned by prosecutors.

It said prosecutors had orders to "inspect the social media accounts and pages of those detained."

Analysts said they expected any further protests to meet a tough response as Sisi seeks to preserve his security credentials. 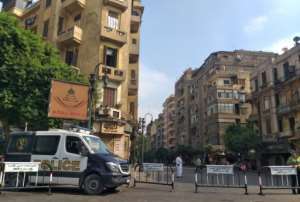 In August 2013, just over a month after Sisi toppled Morsi, police dispersed two camps full of supporters of the Islamist leader in Cairo, killing about 800 people in clashes, according to official figures.

The government named the Muslim Brotherhood a "terrorist organisation" later that year, but the crackdown on opposition has extended to secular organisations and human rights activists.

While Aly's videos have gained huge traction -- shared millions of times online -- they have provoked fervent counter-attacks from the president's backers, using the hashtags #longliveSisi and #theywantchaos.

For those supporters, Sisi's six years at the helm -- including five as president -- have shown him to be a bulwark against the insecurity and political disintegration unleashed by the Arab Spring elsewhere.