Saving Capital Bank Cheaper Than Destroying It - Founder To BoG 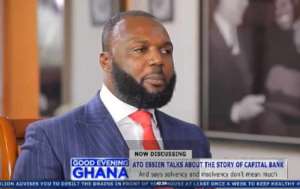 Founder of defunct Capital Bank William Ato Essien has described the Bank of Ghana (BoG) decision to close his bank as unnecessary.

Using a scenario to explain this, he said the decision to collapse the bank was akin to paying 1,000 cedis to destroy a car that needs only 100 cedis to save it.

The Bank of Ghana in August 2017 revoked licences of UT and Capital Banks explaining they had become insolvent.

Government issued a two billion cedi bond to cover the cost of the takeover of Capital and UT Banks in August 2017 after they were deemed insolvent.

More than two years since the collapse, William Ato Essien has come out fighting in an interview on Metro TV’s Good Evening Ghana.

He said the Bank of Ghana could have converted more than ¢ 610m in loans to the company as equity so that it would become a majority shareholder which would have allowed the company to survive.

Ato Essien described the Boulders Advisor’s report which described the bank as poorly run as “o ne of the most unfortunate documentation put together by a consultant.”

He suspects the consultancy service company had an agenda against him, explaining they never spoke to him while preparing the damning report.

He described the revocation of his bank’s licence as a “shocker” and has vowed to get bank his property.

Ato Essien revealed he has sued the Bank of Ghana claiming his right to property under the Property Protection Act has been violated.

Minority investigates impersonation of Adwoa Safo in 2022 bu...
58 minutes ago