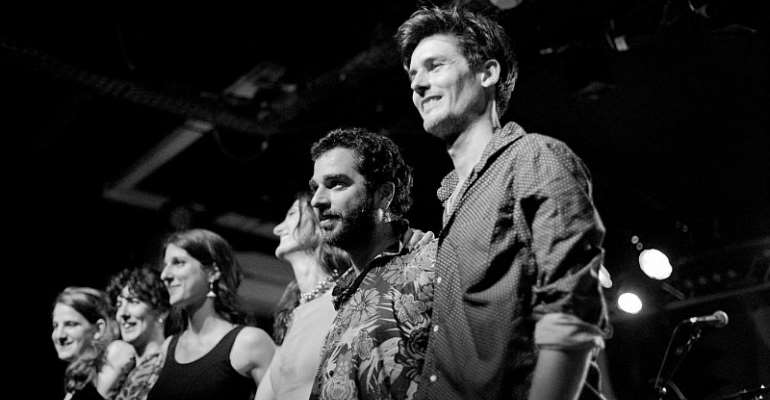 Collectif Medz Bazar is a six-piece 'urban diaspora band' based in Paris. With roots its Armenia, Turkey, France and the US, they draw on the rich traditions of all those cultures, and sing in all four languages. But the blend of Turkish and Armenian musical cultures, based on deep friendship, adds to band's originality. Their third album 'O', meaning love, is testimony to that.

The band formed in 2012 following a jam session on a barge in Paris.

"I'm sure it's no concidence that we met," says double bassist Shushan Kerovpyan. "As Turkish and Armenians I think we were thirsty also of meeting each other and exchanging. But we never thought 'OK we're gonna do an Armenian-Turkish band and we're gonna have this discourse of fraternity and stuff'.

"It's a friendship first of all and actually it's also a form of love and that's what drives us."

Their new, third, album is called 'O' which in the band's invented language means love. It includes bluegrass and rap as well as arrangements of Turkish and Armenian folksongs and their own compositions.

"We are very focused on music," says percussionist Elâ Nuroğlu and maybe we want to change it with music, not with our discourse about the music."

Nuroğlu plays a two-sided drum called the duvul, and much of their percussive-heavy music and songs are dancefloor friendly.

"When you hear the music, the language, you start to dance and enjoy it," says the 29-year old Turkish percussionist, "you can share something with someone else who doesn't have the same history or origins. That's it."