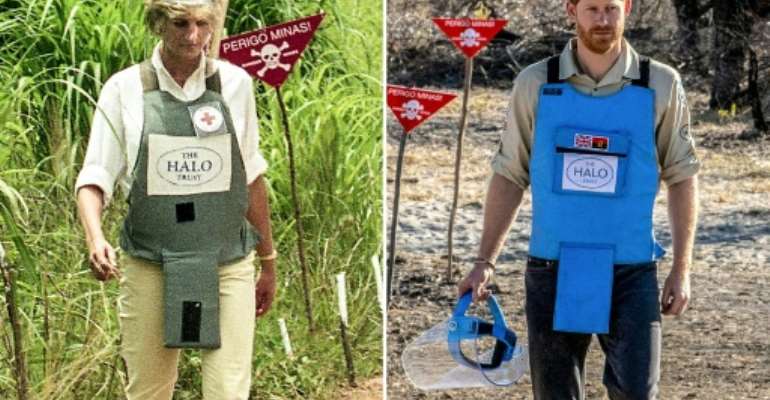 Princess Diana walked across a cleared minefield near the central Angolan city of Huambo in 1997. By - (The HALO Trust/AFP)

Britain's Prince Harry on Friday paid an "emotional" visit to a street in Angola that was once a minefield visited by his mother Diana shortly before her death.

Princess Diana walked across a cleared minefield near the central city of Huambo in 1997 to highlight the plight of a country that remains plagued by land mines 17 years after the end of its civil war.

Just months later Diana was killed in a car crash in Paris, when Harry was 12.

"It has been emotional retracing my mother's steps along this street 22 years on," said Harry, standing on Huambo's now-paved Princess Diana Street.

"Being here on this transformed and bustling street... shows the tremendous impact that clearing landmines has on communities and their futures."

Prince Harry said it had been emotional to retrace his mother's footsteps in Angola. By - (The HALO Trust/AFP)

Diana drew attention to the more than one million landmines planted during Angola's 27-year war, which started after independence from Portugal in 1975.

Earlier on Friday, Harry -- donning an almost exact replica of the protective visor and bullet-proof vest worn by his mother -- detonated a mine in Luengue-Luiana National Park, 1,000 kilometres (600 miles) south-east of Huambo.

The prince, also known as the Duke of Sussex, spent the night in the park. He called on Angolans to protect "the unique wildlife that relies on the beautiful Cuito River that I slept beside".

Harry is on a 10-day tour of southern Africa with his wife Meghan and four-month old son Archie. By MONIRUL BHUIYAN (AFP)

As a conservation advocate, he touched on ongoing efforts to encourage the return of wild animals killed by militia and landmines during the war.

"When this great wilderness rebounds and the land is regenerated," said Harry, "wildlife can and will return to Angola."

He added that elephants would "be able to naturally migrate across borders", easing pressure on neighbouring countries.

Botswana -- which shares a border with Angola -- is currently struggling with a large elephant population.

Later on Friday, Prince Harry visited a recently-renovated orthopaedic hospital in Huambo named after his mother.

More than 1,600 people have been injured by landmines in Angola between the start of the war in 1975 and 2015, according to British charity Halo Trust.

Most casualties occurred in 2002 and 2003, when Angolans returned to their homes after peace was declared.

Diana was famously photographed meeting some of the victims during her visit.

"If an international ban on mines can be secured it means, looking far ahead, that the world may be a safer place for this generation's grandchildren," said the princess at the time.

Harry -- Diana's second son and sixth in line to the British throne -- is on a 10-day tour of southern Africa, which he started in Cape Town with his wife Meghan, the Duchess of Sussex, and four-month old son Archie.

The duchess and Archie remained in South Africa while the Duke toured conservation and HIV prevention projects around the region.

He visited Botswana before Angola, and is scheduled to fly to Malawi on Saturday.

The family will reunite in Johannesburg next week and complete the trip together before flying back on October 2.

Prince Harry last travelled to Angola in 2013 to witness the clearing of a minefield organised by the Halo Trust, which was championed by Diana.