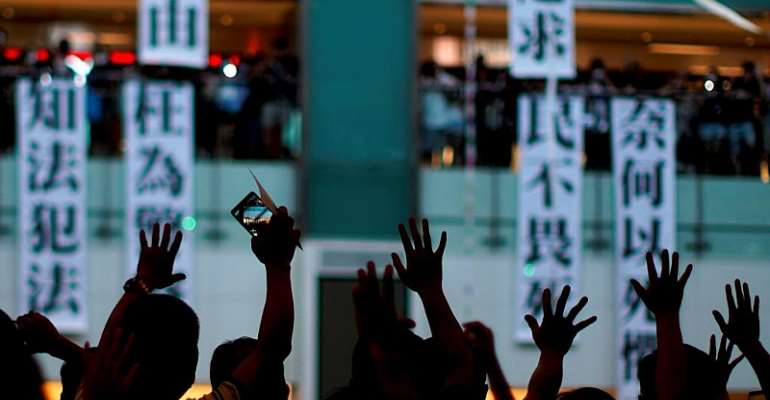 Saturday, 28 September, marks five years to the day that the Umbrella Movement started in Hong Kong. The protest effort was triggered when Beijing demanded pre-election screening of candidates standing for election as Hong Kong's Chief Executive.

“The Umbrella Movement five years ago was an idealistic one. People tried to stick to peaceful means, to fight for democracy and human rights,” says veteran activist Law Yuk-kai, director of the Hong Kong Human Rights Monitor.

“The Umbrella Movement was triggered by a decision by the Central Government in Beijing, not to have modernisations that would lead to the Hong Kong people electing the Chief Executive. Instead the Chinese authorities imposed restrictions that made it virtually impossible for Hong Kong to develop real democracy, both in terms of electing the Chief Executive and the Legislative Council,” he says.

When Hong Kong was handed over in 1997, core documents, signed by the governments of both the United Kingdom and China, the Basic Law and the Joint Declaration, promised an increasing amount of democracy in the territory.

“The promise was put in black and white, and it said that Hong Kong would ultimately achieve full democracy."

Vague terms
But the terms were relatively vague, and while many in Hong Kong thought that the year 2007, ten years after the handover, would see full democracy, Beijing spoiled the party.

“They dragged on the decision, and prevented us from having full democracy," says Law.

“In 2014, people had gotten so frustrated that they took to the streets again. It started with some student activists. They were encircled by the police when they wanted to protest near the building of the Legislative Council. People started using umbrellas against pepper spray and water cannon, and this became a habit and a trademark for the movement.

“The protesters had nothing in their hands to defend themselves.”

Petrol bombs
But, says Law, it is not longer peaceful anymore. “People got frustrated.”

When, in March this year, the Hong Kong government announced it would amend extradition legislature to include the People's Republic of China, protesters hit the streets again. When Carrie Lam, Hong Kong's Chief Executive, didn't immediately withdraw the ordinance, the movement became increasingly violent, with protesters throwing petrol bombs and police being accused of excessive violence when confronting the demonstrators.

In September, Lam finally abolished the law, but it was too little, too late, in the eyes of the demonstrators, who continue their protest demanding investigations into police violence.

Just last Sunday, pro-democracy protesters clashed with riot police outside a mall with some activists vandalising a nearby subway station and defacing a Chinese flag.

Police fired tear gas and rubber bullets in the northern town of Sha Tin late Sunday afternoon, capping a day which saw thousands rally peacefully inside the mall before the mood soured.

Founding of the People's Republic
And for this weekend, new demonstrations are planned.

The Civil Human Rights Front, a network of NGOs in Hong Kong, intends to hold a small commemoration to mark the fifth anniversary of the Umbrella Movement.

“But it won't be a small event,” says Law. “People are still so furious. It will get a huge turnout.”

And on Tuesday 1 October, things may get out of hand as well. On that day, China celebrates the 70th anniversary of the founding of the People's Republic in 1949.