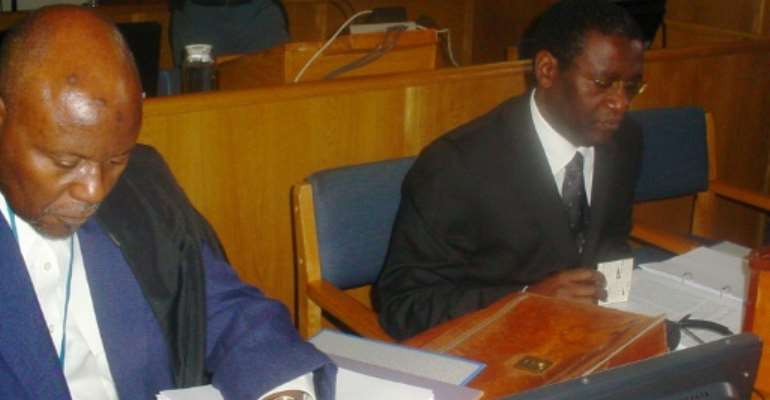 Ngirabatware, right, seated next to his lawyer at the start of his trial in 2008. By EPHREM RUGURIRIZA (AFP)

A former Rwandan minister on Friday lost a retrial for his conviction on genocide crimes for which he was sentenced to serve 30 years in prison by a UN tribunal.

In a rare legal move, the UN's Mechanism for International Criminal Tribunals in 2017 had agreed to review its ruling that convicted Augustin Ngirabatware for his role in the 1994 Rwandan genocide in which an estimated 800,000 people were killed.

The re-assessment began on September 2016 in Arusha, Tanzania where the court is based.

"The Chamber decides, unanimously, that the judgement remains in force in all respects," said judge Theodor Meron in his ruling.

Ngirabatware, planning minister at the time of the genocide, was found guilty of inciting, aiding and encouraging militiamen in his home district of Nyamyumba in northwestern Rwanda to kill their Tutsi neighbours.

In 2016 he filed a request for a review of his convictions, claiming new facts had emerged which exonerated him.

He submitted declarations from witnesses who had implicated him during his first trial affirming they had lied during their testimony.

However, when recalled to testify during the re-trial, the witnesses in question said they had retracted their initial testimony under pressure and intimidation from those close to Ngirabatware.

Ngirabatware, an economist, fled Rwanda in July 1994, worked for research institutes in Gabon and France before being arrested in Germany in 2007.

He was transferred to Arusha a year later where he has been in prison ever since.

Meanwhile, the Arusha-based tribunal on Monday announced that the man considered the mastermind of the genocide, Theoneste Bagosora, who is serving a 35-year sentence in Mali, had requested an early release after serving two thirds of his sentence.

A retired colonel in the Hutu extremist regime that seized power in 1994, Bagosora, now 78, took over the army and unleashed the notorious Interahamwe militia against the Tutsi population and moderate Hutus.

Several of those convicted for genocide crimes have benefited from early releases, which has been much criticised by Kigali.