Mahama Is No Classmate of Otumfuo Osei-Tutu 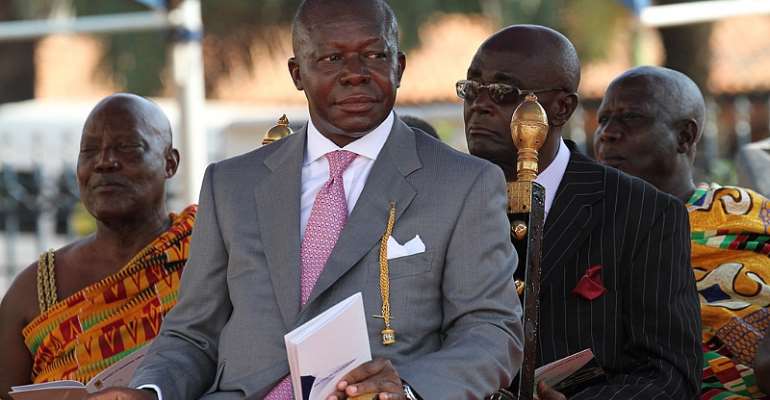 Maybe somebody needs to send a strong and instructive warning signal, that is seriously educate former President Jerry John Rawlings, about the fact that His Royal Majesty, The Asantehene, Otumfuo Osei-Tutu, II, has absolutely no differences to resolve with the former’s sometime ministerial minion and former President John Dramani Mahama, contrary to what the longtime junta strongman would have the rest of the nation and the world believe (See “You Cannot Threaten Former Presidents – Rawlings Tells Youth” Yen.com.gh/Ghanaweb.com 9/25/19). Indeed, at another time in the history of our country, the insufferably insolent Gonja Boy’s brazen attempt to impugn the credibility and dignity of The Asantehene would definitely have resulted in a political and civil conflagration the likes of which may never before have erupted in the country.

It is incontrovertibly clear that ever since Otumfuo Osei-Tutu, II, took up the epic challenge auspiciously thrown to him by President Addo Dankwa Akufo-Addo that cathartically resulted in the salubrious, glorious and definitive resolution of the Yendi/Dagbon Chieftaincy Dispute/Crisis, the self-proclaimed “North Star” has decisively lost his leadership significance and relevance not only in the erstwhile so-called Three-Northern-Regions – presently The Five-Northern Regions, thanks to the leadership foresight of Nana Akufo-Addo – the former Atta-Mills’ arch-lieutenant has seismically lost any credible political footing that he may once have had in the country at large. Mr. Rawlings is also fully aware of this glaring fact, which is that other than Mr. Mahama’s unrivaled patent on rank and thoroughgoing corruption, the man has absolutely no credible and/or viable message for the electorate venturing into the 2020 Presidential Election.

But, of course, while all-too-predictable, his rather inexcusably brassy decision to heretically humiliate Otumfuo Osei-Tutu, II, is not one that is likely to settle down anytime soon, contrary to the facile presumption of a politically and morally effete Mr. Rawlings. But, of course, we need to equally significantly underscore the fact that the sort of insolence with which Messrs. Mahama and Julius Debrah sought to scandalously and indelibly undermine the globally recognized reputation and reverence of The Asantehene was actually bequeathed the Bole Boy and his Okwawu lickspittle, as I understand it, by the former throat-slitting Chairman of the quondam Provisional National Defense Council (PNDC) who, it goes without saying, does not, himself, have any enviable political track-record of showing any emulative modicum of respect for any of our major traditional rulers, least of all, respect for the significance and dignity of The Asantehene.

It is also historically incontrovertible that the overriding objective of both the so-called June 4th and December 31st revolutions, so-called, was to effectively and definitively “deconstruct” what the late President John Evans Atta-Mills once snidely characterized as “The Asante Project.” Now, having scandalously failed in the effort, the former Chairman Jeremiah John Rawlings has shamelessly resorted to the farcical role-play of statesmanship. There is absolutely nothing statesmanlike about the man who woefully miscalculated the Machiavellian policy of Ethno-Selective Genocide as a means of totally obliterating the age-old ineradicable organic architecture that is Akan Civilization, especially that splendid aspect of the latter that has been so formidably and regally represented by ethnic Asantes to the rest of the global community for about three centuries now.

It also goes without saying that were he much of a deep thinker, Mr. Mahama would long have anticipated the seismic backlash that was apt to meet his rather asinine, albeit doomed and stillborn, attempt to reduce the status and dignity of the occupant of the Golden Stool to his own patently mundane and vulgar level. Maybe the former Rawlings’ ministerial wag ought to have seriously enquired about the historical impact and significance of the old Asante Empire vis-à-vis the Gonja State before so rudely and crudely presuming to reduce Otumfuo Osei-Tutu to his own level or even lower. On a personal note, I think Otumfuo Osei-Tutu, II, also ought to share some of the blame for having so heretically allowed Mr. Mahama to so inadvisably come to presume that he could, somehow, force The Asantehene to fit a dunce cap onto his diadem. God forbid!

*Visit my blog at: kwameokoampaahoofe.wordpress.com