Orthodox Ethiopians complain of persecution on eve of major holiday 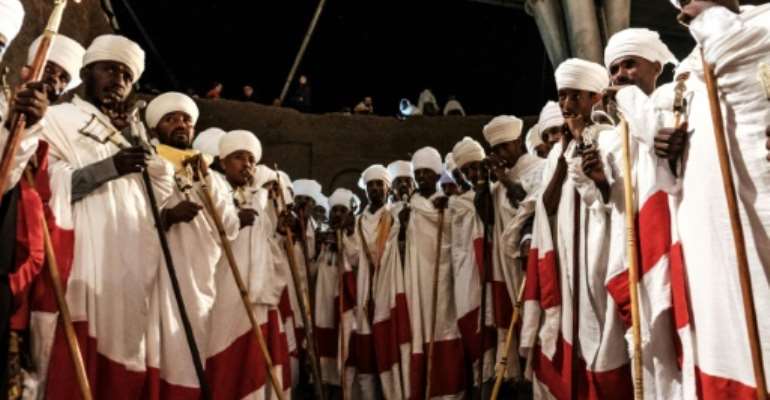 Orthodox Christian leaders in Ethiopia are demanding that the government respond to what they describe as an surge in violence that has seen dozens of churches burned to the ground.

As they prepared to celebrate one of the year's most significant holidays -- Meskel, or "the finding of the cross" -- church officials on Friday urged Prime Minister Abiy Ahmed to protect them and hold perpetrators of religious violence to account.

"The Orthodox Christians are not happy with the government," Aklil Damtew, the church's project coordinator, told AFP.

Rising tensions between the Orthodox leadership and Abiy's administration risk introducing a new element of instability in a country already grappling with ethnic violence ahead of elections planned for next year.

Meskel marks the finding by Saint Helena of the "true cross" on which Jesus was crucified. It begins Friday afternoon with Demera, a large gathering and bonfire in Addis Ababa.

On Thursday night, federal police issued a statement warning against any attempt to disrupt the celebrations.

The statement said "writings, displays and unofficial flags" would be banned.

The holiday is coming after two consecutive Sundays of peaceful protests in the country's Amhara region against church burnings.

At least 25 churches have burned down throughout the country over the past two years, Aklil said, adding that the figure was unprecedented.

Church officials say the burnings reflect anti-Orthodox sentiment, but the motives for the attacks are likely more complex.

Some of the burnings, for example, took place in July after a bid by ethnic Sidama leaders to form a new southern regional state kicked off days of unrest.

Terje Ostebo, an expert on religion in Ethiopia at the University of Florida, said conflicts that appear to be rooted in religion are often also shaped by disputes over land use, ethnicity and other issues.

"These things are always entangled and I've had so many cases where I'm trying to figure out a local conflict that was presented as ethnic or religious, but it turns out they were both," he said.

Along with the burnings, Orthodox leaders are angry about an attempt by some members of the Oromo ethnic group, Ethiopia's largest, to break away and form a new church faction.