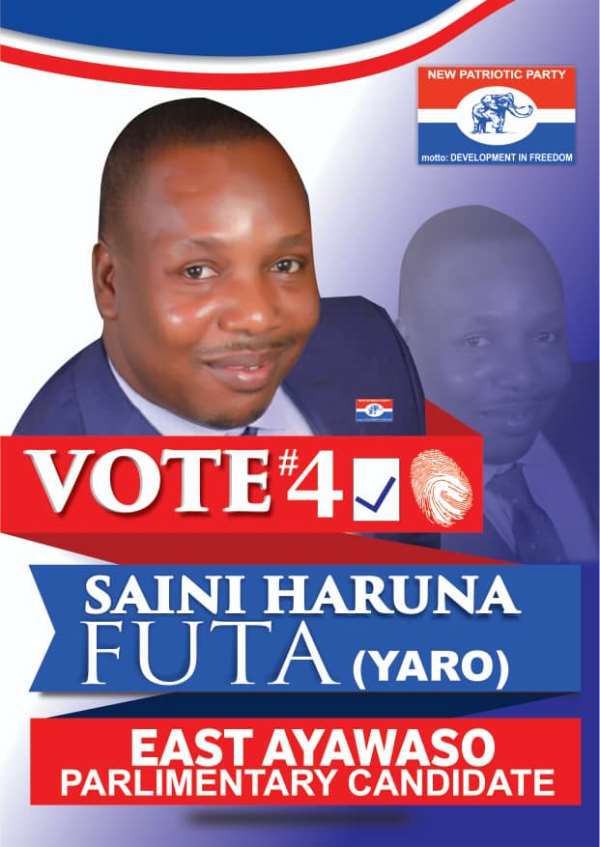 Hon. Saini Haruna Futa has expressed the hope that the New Patriotic Party ( NPP) delegates in Ayawaso East will endorse his candidature in the upcoming party parliamentary primaries.

Mr. Futa popularly known as Yaro to constituents is upbeat of his chances based on his campaign messages and plans he has for the party and the constituency at large.

Interacting with this reporter in Accra on Wednesday, the aspirant was of the view that the NPP in Ayawaso East needs a competent and formidable person to lead and win the 2020 parliamentary election for the party.

Mr. Seini Futa, who holds an MBA from the Coventry University in UK pointed out that we don't need only money to win elections but good policies and ideologies, and that the constituency has competent and better candidates to represent it at parliament.

His priorities among other things include education, empowerment, health, job creation, skills training in ICT and human development.

I intend to make Nima and the constituency at large a business hub in the Greater Accra Region to help create jobs and incomes for the indegenes of the area.

The youth shall be given adequate skills training in ICT by liaising with tertiary institutions.

" We shall through the scholarship secretariat and GetFund office offer scholarships to our brilliant but needy students to further their education at the highest level".

He disclosed that his campaign has been massively received by party delegates and faithful and that gives him the conviction that the people will give him the nod over his competitors.

The aspirant said that he possesses qualities, skills and competencies required of a politician and that he is capable of annexing the Ayawaso East seat for the NPP.

" I do not believe in the assertions that the constituency is a stronghold of the opposition NDC. The constituency used to be the seat of the Danquah -Busia tradition until 1992 when it changed in favour of the NDC under former president Rawlings " he revealed.

He further debunked claims that he is not popular to the delegates and constituents and also relying on his elder brother Abdul Aziz Futa, the National Nasara Coordinator's popularity to campaign and win sympathies of delegates.

Saini Haruna Futa responded " I am the most popular candidate amongst the aspirants and I am not hiding under anyone to campaign. I have been a politician and an event planner for long and have also done a lot for the party in the constituency and beyond ".

Politics he advised should not be about money where people sell their rights and conscience for peanuts to politicians who are angry for power and fame.

He was hopeful that the primaries would go on smoothly and peacefully devoid of violence.

He pointed out that the outcome of primaries would not derail his commitment and dedication to the course of the NPP.

It's not about winning but having the courage to contest and willingness to serve the party and the people in other capacities. NPP should be the focus and not individual interest or gains.

He used the opportunity to appeal to all aspirants to conduct an issue and policy based campaign devoid of unnecessary attacks and counter attacks on each other.

The founder of the Ghana Muslim Students Association ( GMSA) at Oda Secondary School seized, the opportunity to praised, President Nana Addo for his fight against corruption and for implementation of vital social intervention programs.

He mentioned Free SHS, 1D1F, planting for foods and jobs, Nabco policies amongst others as some of the social intervention projects undertaken by the government which have helped to improve people's living conditions.

The President is bringing Ghana's economy back on track after it has been messed up by the previous government.

The government needs the support of all to achieve on its mandate to make life meaningful and bearable for all.

He advised the youth especially those from the Zongos to take education seriously, be respectful and law abiding citizens so as to contribute their quota to the socio- economic advancement of Ghana.