By ValÃ©rie LEROUX with Imed LAMLOUM in Tripoli 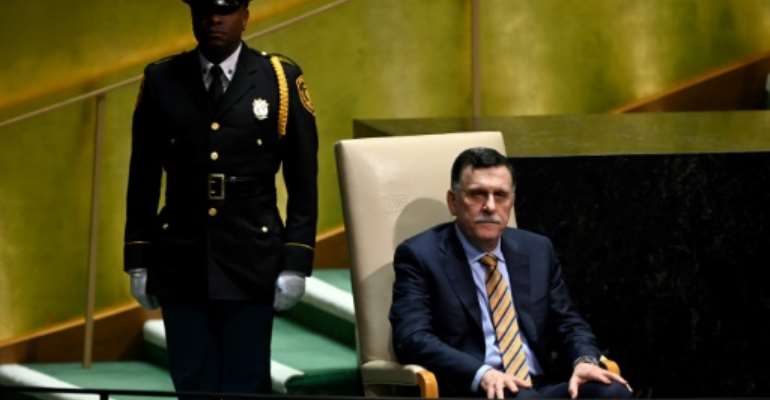 Prime Minister Fayez al-Sarraj waits to speak at the General Assembly on September 25 in New York. By Johannes EISELE (AFP)

Libyan strongman Khalifa Haftar whose forces have been battling to capture the seat of the UN-recognized government in Tripoli since April, said he was open to "dialogue" ahead of a special UN session Thursday.

His forces are fighting those of the internationally recognized Government of National Accord (GNA), led by Prime Minister Fayez al-Sarraj, in a country that has been plagued by violence since Libyan dictator Moamer Kadhafi was killed in 2011.

"When all is said and done, we need dialogue and we need to sit down" at the negotiating table, Haftar said in a statement issued Wednesday night.

Hours later, France and Italy brought together the conflict's regional actors in a special Thursday session on the sidelines of the UN General Assembly in New York.

Their mission: to unify the international community and coalesce around the best way out of the conflict.

Sarraj is backed by Turkey and Qatar, the latter of which was absent from the table. Haftar's allies, the UAE and Egypt, sat on the other side, as the small diplomatic gathering got under way.

The idea was to organize "political pressure on the main actors supporting each (Libyan) faction so that they might conclude that it's time to stop the military competition game and proxy war," a European diplomat said on condition of anonymity.

Haftar's Wednesday declaration was seen as a positive sign after his faction declared only weeks prior that a "military solution" was the only way out.

Haftar's self-styled Libyan National Army launched an offensive on April 4 to conquer the seat of Sarraj's government in Tripoli, and purge it of "terrorist groups."

Libyan strongman Khalifa Haftar, pictured in May 2018, has said he hopes for dialogue on the conflict in his country. By Abdullah DOMA (AFP/File)

The violence has killed more than 1,000 people according to the UN, and has seen the two sides become entrenched in a stalemate on the capital's southern outskirts.

Haftar has repeatedly hammered home that dialogue would "not be possible so long as terrorist groups and criminal militias control... Tripoli" in reference to forces loyal to the GNA.

But he hoped the UN meeting would lead to proposals that help "restore security and stability" in Libya.

French Foreign Minister Jean-Yves Le Drian, criticized for his support of Haftar before the Tripoli offensive, did not mince words.

"There will be no military solution in Libya. Those who think otherwise are wrong and risk dragging this country into a dramatic downward slide," he said ahead of the meeting, which was co-chaired by his Italian counterpart Luigi Di Maio.

Paris is particularly worried about the risk of an Islamic State insurgence in southern Libya.

French Foreign Minister Jean-Yves Le Drian, pictured at the UN on September 26, said a military solution would not solve the conflict in Libya. By Bryan R. Smith (AFP)

The goal is for an agreement on four points: respect of a cease-fire, an arms embargo, sharing of oil resources, and organization of an inter-Libyan conference.

An international conference would gather the conflict's actors and their allies in Berlin, according to a plan proposed by UN envoy to Libya Ghassan Salame.

Countries in North Africa's Sahel region have been hit hard by the shockwaves and fallout from the Libyan crisis, and have taken a greater role in the African Union's efforts to settle the conflict.

Regional leaders called this week for the appointment of a joint UN-AU special envoy.

"Africa has expertise which has just been confirmed in the Sudan crisis," Mahamadou Issoufou, president of Niger, told AFP in an interview.

"Libya is on the African continent, Libya is African, we cannot solve the Libyan problem by leaving the AU at the margin," he said.