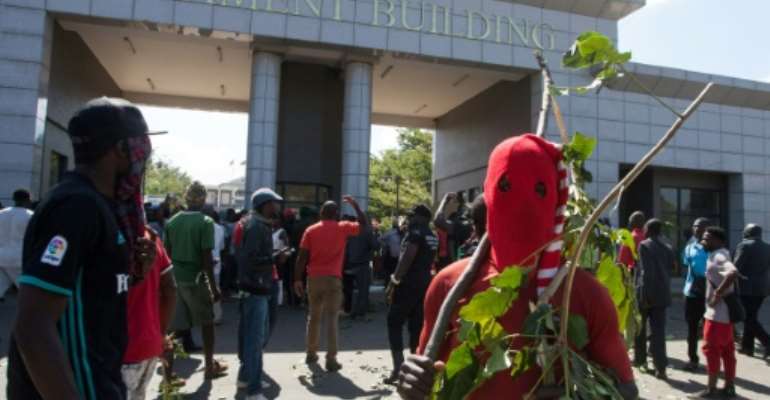 Protests have flared since the elections in May, which saw President Peter Mutharika secure a second five-term. By AMOS GUMULIRA (AFP)

A Malawian anti-government protester has died in prison after being brutally detained by military officials during a protest last week, a family lawyer said Thursday.

Justin Phiri was arrested while taking part in demonstrations against presidential election results in the northern town of Karonga.

Protests have flared since the elections in May, which saw President Peter Mutharika secure a second five-term with 38.57% of the vote.

Most demonstrations have turned violent since the election, with security forces firing tear gas and water canons to disperse the crowds.

Phiri was among 15 protesters arrested by the military last week. He was transferred to the town of Mzuzu, where he was due to appear in court.

He died in custody on Tuesday, aged 29. His lawyer, family and protest organisers claim he was beaten by army officials.

"The post-mortem has not yet been conducted but the fact of the matter is that he was heavily beaten by MDF (Malawian Defense Force) soldiers before he was transferred to Mzuzu," family lawyer Bracious Kondowe told AFP.

"He has some wounds at the back showing that he was brutally beaten," said Kondowe, adding that he could not be certain what caused Phiri's death.

MDF spokesman Paul Chiphwanya told AFP he was not aware of "this story".

"People are saying he was assaulted by the army but we don't know how far true that is," Chiphwanya said.

Phiri, a carpenter, was among thousands of protesters calling for the sacking of the head of the electoral commission because of the fraud allegations.

Malawian police confirmed Phiri's death and called for the circumstances to be investigated.

"What we know is that one of the people who was in custody pending a court appearance died before appearing in court," police spokesman Thomeck Nyaude told AFP.

Around 30 people were injured at the protest during which Phiri was arrested last week.

"It's a very sad day for democracy in this country," said Happy Mhango, head of a human rights coalition that has organised the protests.