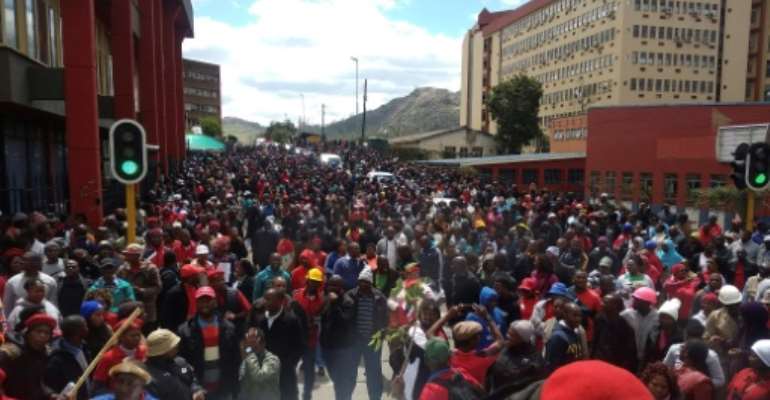 Thousands of Public Servants and teachers march through the streets of Mbabane. By MONGI ZULU (AFP)

Teachers and workers went on strike last week in the four main towns of eSwatini -- a tiny southern African kingdom until recently known as Swaziland, surrounded by South Africa and Mozambique.

They accuse King Mswati III of draining public coffers at the expense of his subjects, and flocked to the capital Mbabane from Friday to discuss action with opposition pro-democracy groups.

Police fired tear gas, stun grenades and water canons on Wednesday to disperse the crowd, who responded by pelting rocks at police cars and government buildings.

"Our problem is that we have a selfish king," said Sibongile Mazibuko, who heads the Ngwane National Liberatory Congress pro-democracy group. "He loots national coffers to satisfy his personal greed."

"The same government says they have no money," he said.

Frustrations have boiled over into a series of protests around the country this week.

More than 3,500 people marched in Mbabane and the neighbouring city of Manzini on Monday, and around 3,000 protesters showed up in the capital again on Wednesday. 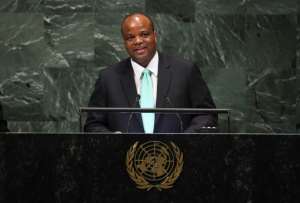 South Africa's trade union federation announced "border protest action" in the neighbouring province of Mpumalanga on Wednesday "in support" of the eSwatini strike.

"The workers demand only 7.8 percent salary adjustment while the Mswati regime spends millions of rands for his lavish lifestyle," said the Congress of South African Trade Unions (COSATU) in a statement.

"This is (a) fight," said Dludlu. "Protest action is not like a coffee session."

The government said earlier this month that it was unable to meet the protesters' demands.

"Government is in a challenging financial situation, hence (its) inability to award civil servants with a cost of living adjustment for the past two years," Prime Minister Ambrose Dlamini said in a statement.

King Mswati III was crowned in 1986, when he was just 18. He has come under fire for his expensive tastes, frivolous spending and prioritising his family's needs.

The king's older daughter Princess Sikhanyiso was appointed as a member of cabinet last year, stoking outrage among pro-democracy groups.

He is currently attending the UN general assembly in New York.

"It is not true that there is no money in this country," said Dludlu.

"The PM is not a problem, we know where our problem lies. We have a greedy king. The royal family impoverishes this country," he told AFP.

eSwatini ranked 144 out of 189 the UN's latest Human Development Index. Around two thirds of the country's 1.4 million inhabitants lives below the poverty line.