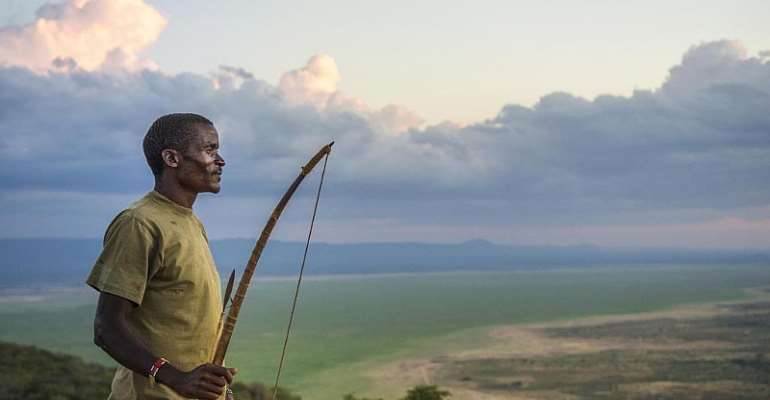 A pioneering carbon offset project run by Hadza hunter-gatherers in Tanzania has been awarded the UN's Equator Prize for conservation and sustainability at a ceremony in New York, along with 21 other indigenous groups that are using natural solutions to combat climate change.

For the past 40,000 years, the Hadza community has been living in the Yaeda valley just south of the equator, sandwiched between the salt planes of Lake Esayi and Mount Ngorongoro in northern Tanzania.

The Hadza are among the last surviving hunter-gather groups on the planet. Around 300 out of 1,200 Hadza people still live a traditional lifestyle.

For decades migrant farmers and cattle herders encroached on and eventually decimated the wildlife-rich savannah and woodlands where the Hadza roamed.

“Just few years ago we had no concept of owning land,” explains Ezekiel Phillipo, a representative of the Hadza group, who travelled to New York to pick up the Equator Prize at the United Nations' headquarters.

But later they received help from the social enterprise, Carbon Tanzania, to obtain legal deeds to 24,000 hectares (57,000 acres). This meant the Hadza could then enter commercial agreements to earn money the land.

“We launched the Yaeda Valley Project in 2013 to trade carbon offsets from woods and forests that cover our territory,” explains Phillipo and adds, “We Hadza, we always protect our environment because that is how we survive, so really if this carbon offset programme was not here, we would still be doing that.”

Carbon schemes
Carbon trading schemes are emerging all over the world as governments try to meet greenhouse gas emissions reduction targets in the fight against climate change.

The European Union has agreed to link its own carbon market with Australia's scheme in 2018, and has struck a deal with China to help with the design and implementation of its emissions trading schemes.

Under cap-and-trade schemes, companies or countries face a carbon limit. If they exceed the limit they can buy allowances from others. They can also buy carbon offsets from outside projects which avoid emissions, often from developing countries.

The Hadza have earned around €300,000 from the Yaeda Valley Project. The project is one of 21 selected for the 2019 Equator Prize, awarded at UN headquarters in New York City on Tuesday 24 September.

Equator Prize
The prize is awarded to indigenous groups by the UNDP Equator Initiative for innovative work in developing solutions to climate change and promoting sustainable development.

Businesses were among the prize winners this year, including Dutjahn Sandalwood Oils that supplies the luxury industry with oil sustainably harvested by the Kutkabubba aboriginal community in Western Australia.

The Native Communities of Nuevo Saposoa and Patria Nueva de Mediación Callería have also been awarded the Equator Prize for completely stopping deforestation after obtaining legal rights to 15,000 hectares of their ancestral land. Since the project's inception in 2007 the association has been using mobile phones to monitor satellite imagery of the area and collaborate with local law enforcement agencies.

“We are able to do many things that otherwise we could not afford, like sending our children to university, or paying hospital bills if we fall sick, or giving salaries to game scouts to patrol our forests,” says Phillipo of the Hadza.

The carbon revenues have also paid for a team from the regional health department to bring field clinics to the communities to test for and treat tuberculosis, common eye disorders, and other illnesses.

“It supports sustainable socio-economic development,” says Marc Baker, Carbon Tanzania's CEO and co-founder. “It also proves the power of cooperation between all sorts of organisations and people – from international financial experts and African local governments to conservation organisations and, most importantly, to these communities.”

Mahama never paid compliments to Atta Mills like Bawumia do ...
45 seconds ago

History NDC MPs made on 7th January has been wiped out; Cou...
10 minutes ago